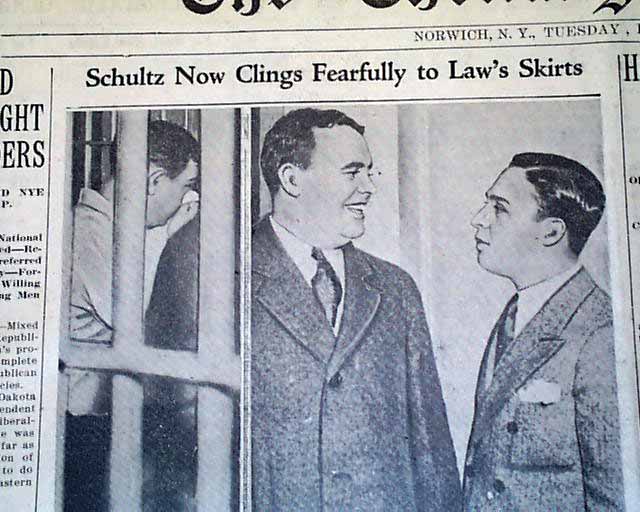 This 8 page newspaper has a three column photo with caption: "Schultz Now Clings Fearfully to Law's Skirts" which shows Shultz behind bars with his lawyers conferring nearby (see photos).

Other news of the day including period advertising. Light browning, otherwise in good condition.

At the time of the Martin killing, Schultz was busy fighting a federal tax evasion case; moreover, U.S. Attorney Thomas Dewey had set his sights on convicting Schultz. Schultz was convicted of his charges, which were soon overturned. Schultz's lawyers convinced the judge that their client could not get a fair re-trial in New York City, so the judge moved it to the small town of Malone in rural upstate New York.

Looking to influence potential jurors, Schultz presented himself to the town as a country squire and good citizen. He donated cash to local businesses, gave toys to sick children and performed other such charitable deeds, a strategy which proved successful. In the late summer of 1935, to everyone's surprise, Schultz was acquitted of tax evasion.