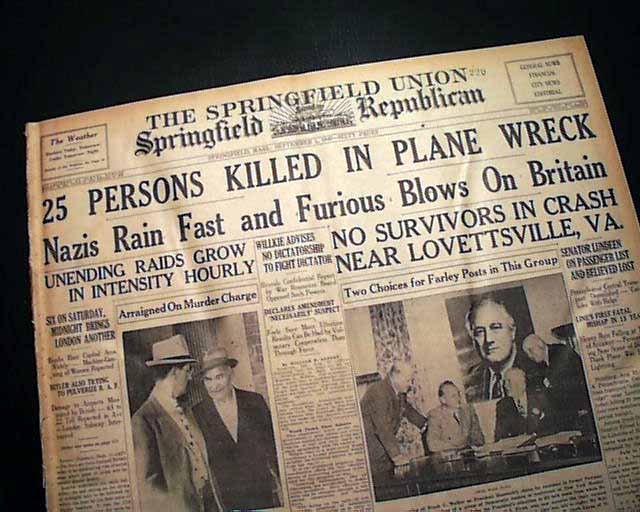 This 30+ page newspaper has a nice banner headline on the front page: "25 PERSONS KILLED IN PLANE WRECK" with subheads that include: "SENATOR LUNDEEN ON PASSENGER LIST AND BELIEVED LOST" and more. (see)

wikipedia notes: The Lovettsville Air Disaster occurred on August 31, 1940 near Lovettsville, Virginia. Pennsylvania Central Airlines Trip 19 was a new Douglas DC-3A that was flying through an intense thunderstorm at 6,000 feet (1,800 m). Numerous witnesses reported seeing a large flash of lightning shortly before it nosed over and plunged to earth in an alfalfa field. With limited accident investigation tools at the time, it was at first believed that the most likely cause was the plane flying into windshear, but the Civil Aeronautics Board report concluded that the probable cause was a lightning strike. U.S. Senator Ernest Lundeen from Minnesota was one of those killed.

"Trip 19", as it was designated, was under the command of Captain Lowell V. Scroggins with First Officer J. Paul Moore. The pilot and copilot had over eleven thousand and six thousand hours experience respectively, although only a few hundred were on DC-3s. In the jump seat rode a new administrative employee of the airline, hired on August 26.

The DC-3A was newly delivered from the Douglas Aircraft on May 25, 1940 equipped with twin Curtiss-Wright R-1820 Cyclone 9 engines (also designated as G-102-A).