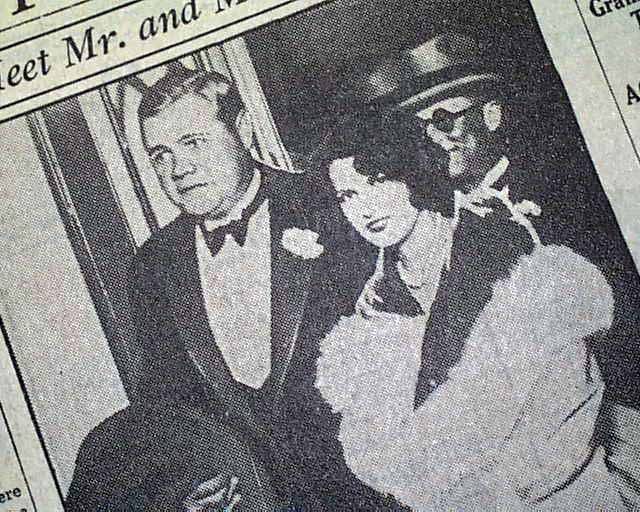 This 24 page newspaper has a two column photo on the front page with caption: "Meet Mr. and Mrs. Babe Ruth" with some text.

This tells of the wedding of Babe Ruth and Claire Hodgson on what was supposed to be the opening day of the 1929 baseball season at Yankee Stadium. However rain canceled the game for that day.

Born near Athens, Georgia, United States, she met Ruth in 1923, a year after her husband Frank Hodgson died, leaving her with a daughter, Julia. Ruth was still married to Helen Woodford. Woodford died in a house fire in January 1929, and Ruth and Hodgson married that April 17, staying together until Ruth's death in 1948. She is buried next to him at Gate of Heaven Cemetery in Hawthorne, New York. The inscription on the headstone lists Claire Ruth's birth year as 1900 instead of 1897.

She lived to see two of Ruth's most famous records broken: his single season record of 60, by Roger Maris in 1961; and his career record of 714, by Hank Aaron in 1974. In her twilight years, she sometimes attended games that Aaron was playing in, and was supportive of Aaron's effort. The gracious widow Ruth was quoted as saying, "The Babe loved baseball so very much; I know he was pulling for Hank Aaron to break his record." Curt Gowdy of NBC-TV spotted her in the stands once and the always-effusive Gowdy said, "There's Claire Ruth. She's Hank Aaron's biggest fan."

Mrs. Ruth's support for Aaron is in stark contrast to the role of her in the 2001 TV-movie 61*, in which she was portrayed as not wanting her husband's record of 60 home runs in a season to be broken, by Roger Maris (who went on to hit 61 in 1961) or anyone else.