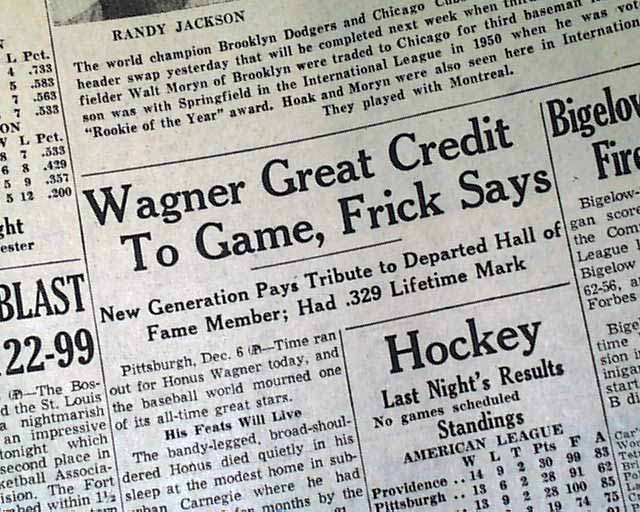 wikipedia notes: Johannes Peter "Honus" Wagner (pronounced /ËhÉnÉs ËwæÉ¡nÉr/; February 24, 1874 – December 6, 1955), nicknamed The Flying Dutchman due to his superb speed and German heritage, was an American Major League Baseball shortstop who played in the National League from 1897 to 1917, almost entirely for the Pittsburgh Pirates. Wagner won eight batting titles, tied for the most in NL history with Tony Gwynn. He also led the league in slugging six times, and in stolen bases five times.

In 1936, the Baseball Hall of Fame inducted Wagner as one of the first five members. He received the second-highest vote total, behind Ty Cobb and tied with Babe Ruth.

Although Cobb is frequently cited as the greatest player of the dead-ball era, some contemporaries regarded Wagner as the better all-around player, and most baseball historians consider Wagner to be the greatest shortstop ever. Cobb himself called Wagner "maybe the greatest star ever to take the diamond."