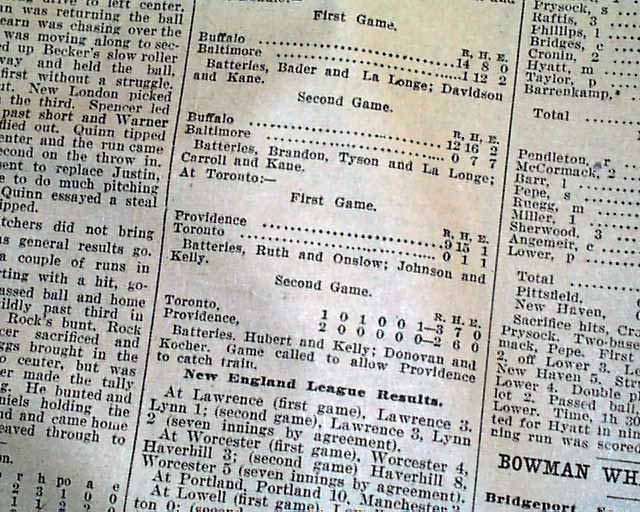 Without question the most noted & heralded baseball player of all time was Babe Ruth, who even today--more than 60 years after his death--remains a fixture in baseball history.

Known as the "king of swat" because of his home run hitting prowess, his very first professional home run came as a minor league player with the Providence Grays on September 5, 1914. Ruth's early professional career is somewhat convoluted, as noted by the following from baseball-reference.com:

"...He played everywhere on the field, but drew attention as a left-handed pitcher and started playing with local semi-pro teams in the summer of 1913. That is where Jack Dunn, owner of the minor league Baltimore Orioles spotted him and offered him a contract with the team for the following season.

Ruth made his first Major League appearance on July 11, 1914, less than five months after leaving St. Mary's. On August 18 was sent down to the minor league Providence Grays who were in a fight for the International League pennant.

In 46 minor league games, Ruth only hit a single home run. It came on September 5, 1914, while Ruth was in the middle of pitching a one-hitter for Providence on the road in Toronto. The blast was a three-run homer off [Ellis] Walter Johnson.

He returned to Boston for the final week of the 1914 season."

This newspaper reports on the game in which he hit the home run. It is very rare to find mention of the game--and in particular Ruth playing in the game--as International League events were not commonly reported in newspapers of the day. Since he pitched in the same game he hit the home run, his name appears in the battery listing (see photos). There were no reports of the game specifically noting the home run was hit. This game was the very beginning of his home run career in baseball and remains a very significant report as such.
Curiously, the facing page has a nice photos of Francis Ouimet winning the U.S. Amateur Golf Championship, a year after his historic win at the U.S. Open at the age of 20, and the focus of the recent movie "The Greatest Game Ever Played".

Issues from this era are typically somewaht brittle (as is this issue); with little margin wear and tear, otherwise good.  It does have a slightly rough left spine (see images).  Handle with care.  A rare report for the serious baseball history fan.