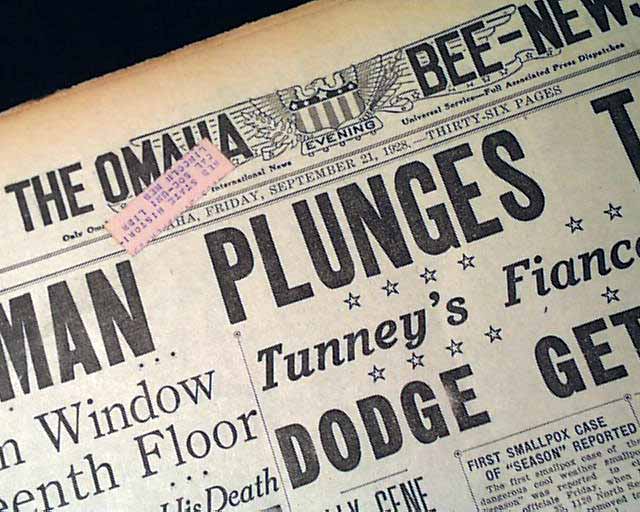 This 26 page newspaper has one column headlines on page 2:
"'MURDER FARM' FUGITIVE SAYS CASE FRAMEUP" "Northcott Unafraid as He Prepares to Fight His Return for Trial" with related photos also on page 2. (see)

Tells of the Wineville Chicken Coop murders when suspected killer Gordon Northcott was found and arrested in Canada. These murders were featured in the Clint Eastwood movie 'Changeling' starring Angelina Jolie.

Other news of the day throughout. Light browning with little margin wear, otherwise nice.

wikipedia notes: The Wineville Chicken Coop Murders — also known as the Wineville Chicken Murders — was a series of kidnappings and murders of young boys occurring in Los Angeles and Riverside County, California, in 1928. The case received national attention and events related to it exposed corruption in the Los Angeles Police Department. The 2008 film Changeling is based upon events related to this case.

In 1926, Saskatchewan-born ranch owner Gordon Stewart Northcott took his 13-year-old nephew, Sanford Clark (with the permission of Sanford's mother and reluctant father), from his home in Saskatoon, Saskatchewan, Canada. Before his sister, Jessie Clark, told the police about the situation, Northcott had beaten and sexually abused Clark.[4] In September 1928, the Los Angeles Police Department visited the Northcott Ranch in Wineville. Police found Clark at the ranch and took him into custody.

Clark claimed that Northcott had kidnapped, molested, beaten, and killed three young boys with the apparent help of Northcott's mother, Sarah Louise Northcott. Clark said quicklime was used to dispose of the remains, and that the bodies were buried at the Wineville ranch. Authorities found shallow graves exactly where Sanford Clark had stated that they could be found at Wineville. It was later learned that the bodies had been dug up by Gordon Northcott, (once Gordon knew that the Police were onto him) and were dumped in the desert, where they were never recovered. There were only partial remains of hair, blood and bones found at the Wineville burial sites.