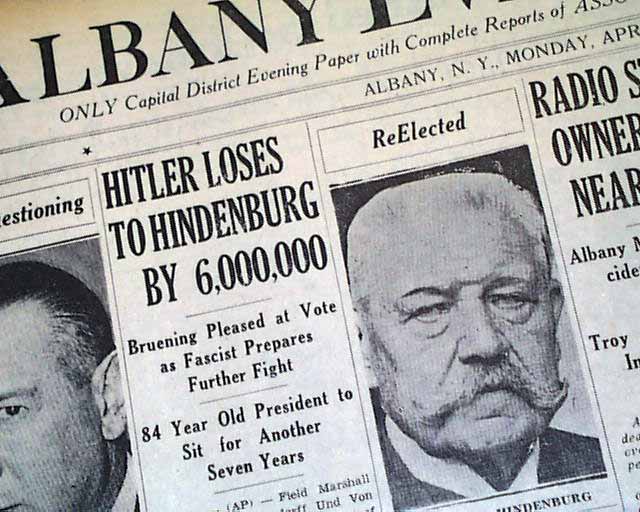 This 24 page newspaper has one column headlines on the front page that include: "HITLER LOSES TO HINDENBURG BY 6,000,000" "84 Year Old President to Sit for Another Seven Years" and more with photo of Hindenburg. (see)

Tells of the German election of President Paul Von Hindenburg over Adolph Hitler.

Other news of the day. A few small binding slits along the spine, otherwise in good condition.

wikipedia notes: The presidential election (Reichspräsidentenwahl) of 1932 was the second and final direct election to the office of President of the Reich (Reichspräsident), Germany's head of state during the 1919-1934 Weimar Republic. The incumbent President, Paul von Hindenburg, had been elected in 1925 but his seven year term expired in May. After two rounds of voting, on the 13 March and the 10 April, Hindenburg was re-elected to a second term of office. His major opponent in the election was Adolf Hitler of the Nazi Party (NSDAP).

Under the Weimar system, the presidency was a powerful office and, following his re-election, Hindenburg played an important role in the coming to power of the Nazis, reluctantly appointing Hitler as Chancellor of Germany in January 1933.