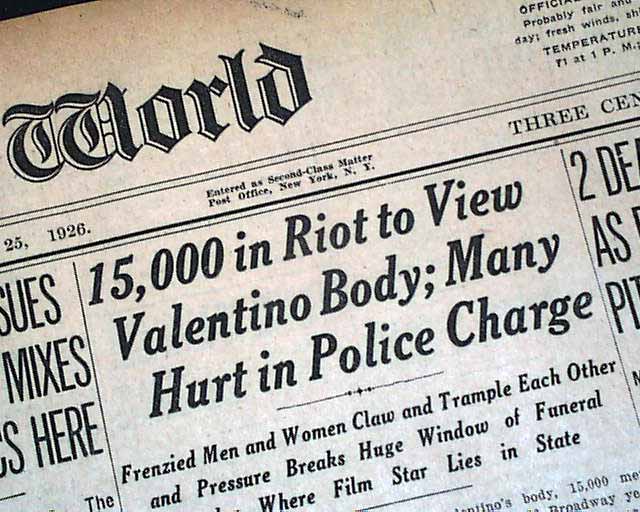 This 30 page newspaper has two column headlines on the front page that include: "15,000 in Riot to View Valentino Body; Many Hurt in Police Charge" and more. (see)

wikipedia notes: On August 15, 1926, Valentino collapsed at the Hotel Ambassador in New York City. He was hospitalized at the Polyclinic in New York and underwent surgery for a perforated ulcer. The surgery went well and he seemed to be recovering when peritonitis set in and spread throughout his body. He died eight days later, at the age of 31.

An estimated 100,000 people lined the streets of New York City to pay their respects at his funeral, handled by the Frank Campbell Funeral Home. The event was a drama itself: actress Pola Negri collapsed in hysterics while standing over the coffin, windows were smashed as fans tried to get in, and Campbell's hired four actors to impersonate a Fascist Blackshirt honor guard, which claimed to have been sent by Benito Mussolini. It was later revealed as a planned publicity stunt.[52]

Valentino's funeral mass in New York was held at Saint Malachy's Roman Catholic Church, often called "The Actor's Chapel", as it is located on West 49th Street in the Broadway theater district, and has a long association with show business figures.

After the body was taken by train across the country, a second funeral was held on the West Coast, at the Catholic Church of the Good Shepherd in Beverly Hills. Valentino had no final burial arrangements and his friend June Mathis offered her crypt for him in what she thought would be a temporary solution. However, she died the following year and Valentino was placed in the adjoining crypt. The two are still interred side by side in adjoining crypts at the Hollywood Memorial Park Cemetery (now the Hollywood Forever Cemetery) in Hollywood, California.