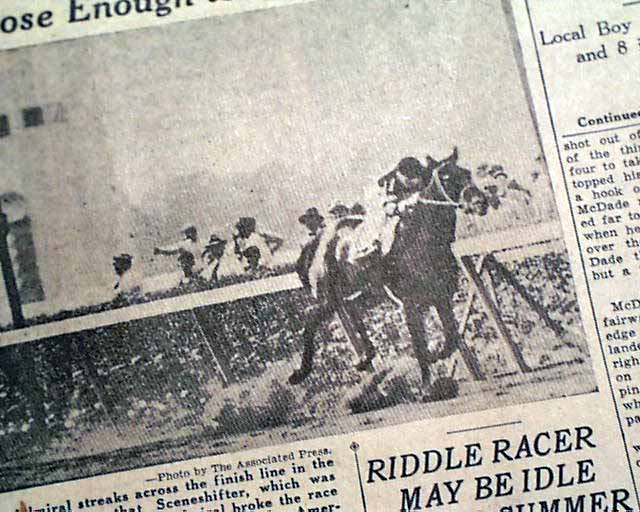 This 28 page newspaper has a four column photo on page 16 with caption: "Sceneshifter Not Close Enough to 'Eat Dirt'" with one column headlines: "RIDDLE RACER MAY BE IDLE FOR SUMMER" "War Admiral's Leg Injury Leaves Doubt About Next Start"

Other news, sports and advertisements of the day throughout. Light browning with little spine wear, otherwise in good condition.

source: wikipedia: War Admiral (1934-1959) was an American Thoroughbred racehorse, the offspring of the great thoroughbred Man o' War and the mare Brushup. He did not resemble his famous father physically, being much smaller (he was only 15'2 hands tall (most racehorses are between 16 and 17 hands) and had a brown coat inherited from his dam; although the movie Seabiscuit portrays him to be a much taller 18' hands - which would make him the same height as many draft horses) and taking the coat color of his father, but he did inherit his fiery temperament and talent.

War Admiral was born at Faraway Farm in Lexington, Kentucky and was owned by Samuel D. Riddle. After 1936, his regular jockey until retirement was Charles Kurtsinger. Racing out of his Glen Riddle Farm in Berlin, Maryland, War Admiral won 21 of his 26 starts, including the Pimlico Special and the coveted U.S. Triple Crown in 1937, earning him the Eclipse Award for Horse of the Year.

War Admiral raced in the Eastern United States and in 1938 won eight major races including the Whitney Handicap and the Jockey Club Gold Cup. War Admiral would be linked forever to Seabiscuit, who was a son of War Admiral's half brother Hard Tack and the pre-eminent horse based primarily in the Western U.S. Their famous match race in the 1938 Pimlico Special, which War Admiral lost to Seabiscuit by four lengths, is considered by some to be the best Thoroughbred horse race in American history.

War Admiral retired with a career earnings total of $273,240. He was the leading American sire in 1945 and the leading juvenile sire in 1948. Before his death in 1959, War Admiral had sired 40 stakes winners. [1] Major War Admiral sires include Blue Peter, Searching, Busanda, Mr. Busher, Navy Page, Cold Command, and Admiral Vee. [2]

He also sired the filly Busher (ranked #40 in Blood-Horse magazine List of the Top 100 U.S. Racehorses of the 20th Century).

War Admiral was elected to the National Museum of Racing and Hall of Fame. In the Blood-Horse magazine ranking of the top 100 U.S. thoroughbred champions of the 20th Century, War Admiral was ranked #13.