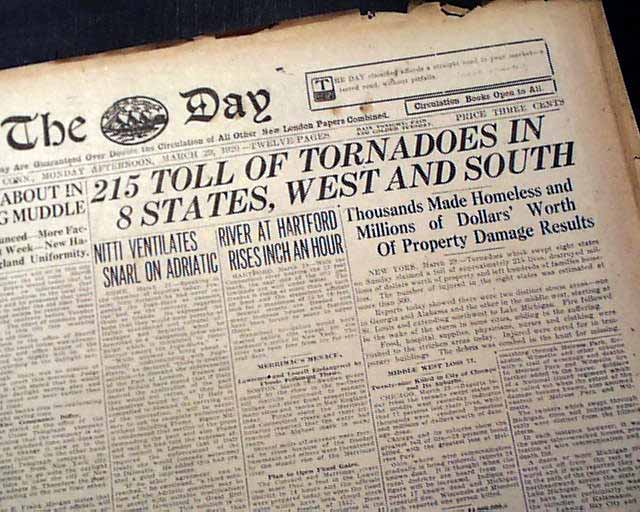 This 12 page newspaper has a four column headline on the front page:
"215 TOLL OF TORNADOES IN 8 STATES, WEST AND SOUTH" which tells of the Palm Sunday tornado outbreak. Other news of the day.

wikipedia notes: The Palm Sunday tornado outbreak of 1920 was an outbreak of at least 38 significant tornadoes across the Midwest and Deep South states on on March 28, 1920. The tornadoes left over 380+ dead, and at least 1,215 injured. Many communities and farmers alike, were caught off-guard, as the storms moved to the northeast at speeds that reached over 60 miles per hour (97 km/h). Most of the fatalities occurred in Georgia (201+), Indiana (56), and Ohio (55), while the other states had lesser amounts.

Severe thunderstorms began developing in Missouri during the early morning hours. The storms moved quickly to the northeast towards Chicago, Illinois. The first tornado injured five people 35 miles (56 km) southeast of Springfield, Missouri in the pre-dawn hours in Douglas County. This first twister was a harbinger of things to come, as the morning went on and the atmosphere began to destabilize, due to the abundance of sunshine that preceded the cold front in the dry slot area, which covered the lower Great Lakes region, extending southward well past the Ohio River Valley.

Newspaper accounts and weather records document over 38 storms of major significance; thus, the probable number of actual tornadoes is much higher, especially when the U.S. Weather Bureau (National Weather Service) prior to 1916 did not conduct any aerial/damage surveys, nor was there any public education campaign for the public to properly report them. The only time prior to 1950 where weather forecasters would conduct an official inquiry is when a single tornado was noteworthy of an extensive investigation, such as the infamous Tri-State Tornado of March 18, 1925, the Tupelo-Gainesville tornado outbreak (Palm Sunday) event of April 5-6th, 1936 or the Woodward, Oklahoma disaster of April 9, 1947.

The only states that kept any solid records on tornadoes after World War I, were the ones that had the highest frequency of occurrence in Tornado Alley. Therefore, the Great Lakes Region varied from state-to-state in their record keeping of such events. Further, it fell upon most state departments of agriculture to record any significant crop damage or livestock losses due to natural disasters. Conversely, starting in 1900, the state of Michigan decided to keep formal records on the annual number of tornadoes across the state and the losses associated with them; whereas, Indiana and Ohio would follow suit in the mid 1920s. These records contained the tornado’s estimated path length, damages, injuries, and deaths to humans, or livestock.

According to Thomas P. Grazulis, head of the Tornado Project, the death tolls in the southern states on Palm Sunday 1920, could have easily been much higher, since the deaths of non-whites were omitted as a matter of official state protocol, even when it came to fatalities from natural disasters. However, U.S. Weather Bureau would change this in the 1950s, when all deaths, regardless of race, that was attributed to severe weather were recorded by federal government policy in every state. Nonetheless, the tornadoes that hit Deep South on March 28, did in fact strike sections of towns that had sizable black populations. No survey information was conducted at this time to determine the actual death toll in these areas which, could be substantially much higher.

Where Kennedy spent the morning of hi...