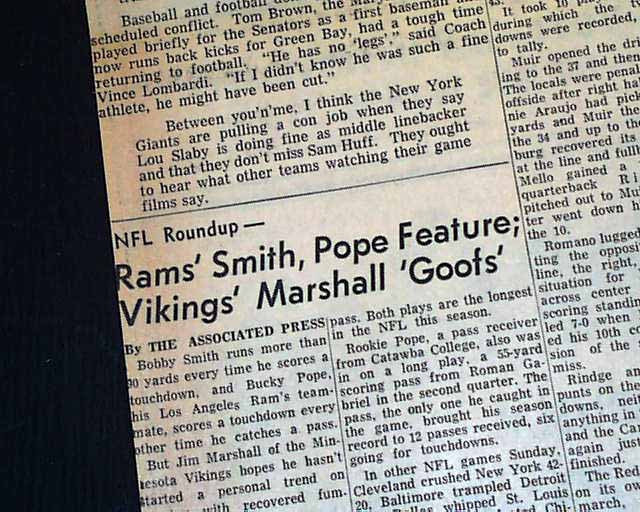 Other news of the day throughout. Unfortunately as you can see, page 8 is close cut along the margin which slightly affects the text of this report. Light browning, otherwise good.

wikipedia notes: During his time with the Minnesota Vikings, Marshall was involved in what is considered by many to be one of the most embarrassing moments in professional sports history on October 25, 1964. In a game against the San Francisco 49ers, Marshall recovered a fumble, but ran 66 yards with it the wrong way, into his own end zone. Thinking that he had scored a touchdown for the Vikings, Marshall then threw the ball away in celebration. The ball landed out of bounds, resulting in a safety for the 49ers, though Vikings won the game 27-22, in part because of a key sack and fumble he forced after his miscue. Marshall later received a letter from Roy Riegels, stating, "Welcome to the club". [4] While playing for the University of California, Riegels was tagged with the nickname "Wrong Way" after making a similar blunder in the 1929 Rose Bowl. Unlike Marshall's mistake, Riegels' run cost his team dearly; the two points scored from the ensuing safety off the blocked punt proved to be the margin of defeat in an 8-7 loss.