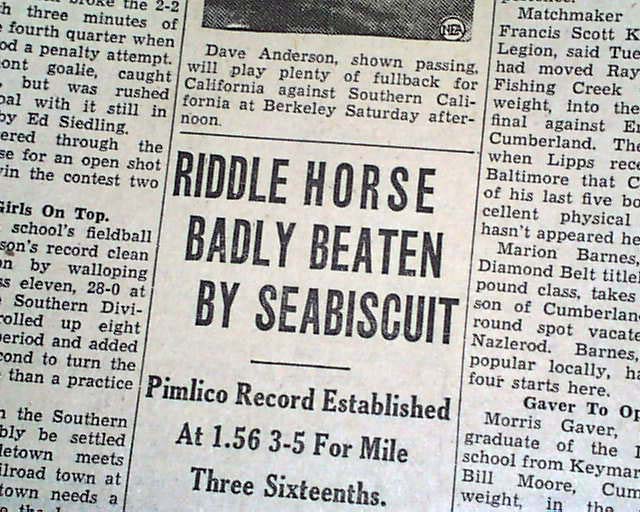 This 10 page newspaper has one column headlines on page 6: "RIDDLE HORSE BADLY BEATEN BY SEABISCUIT" and "Pimlico Record Established At 1:56 3-5 For Mile Three Sixteenths" with smaller subheads (see photos). Tells of the 'Match of the Century" between Seabiscuit and war Admiral at Pimlico Race Course.

Other news of the day throughout. Light browning  with little spine wear, otherwise in good condition.

wikipedia notes: Seabiscuit (May 23, 1933—May 17, 1947) was a champion thoroughbred racehorse in the United States. From an inauspicious start, Seabiscuit became an unlikely champion and a symbol of hope to many Americans during the Great Depression. Seabiscuit became the subject of a 1949 film, The Story of Seabiscuit, a 2001 book, Seabiscuit: An American Legend, and a 2003 film, Seabiscuit, which was nominated for the Academy Award for Best Picture.

On November 1, 1938, Seabiscuit met War Admiral in what was dubbed the "Match of the Century." The event itself, run over 1 and 3/16 miles (1.91 km), was one of the most anticipated sporting events in U.S. history. The Pimlico Race Course, from the grandstands to the infield, was jammed solid with fans. Trains were run from all over the country to bring fans to the race, and the estimated 40,000 at the track were joined by some 40 million listening on the radio. War Admiral was the prohibitive favorite (1-4 with most bookmakers) and a near unanimous selection of the writers and tipsters, excluding the California faithful.

Head-to-head races favor fast starters, and War Admiral's speed from the gate was the stuff of legend. Seabiscuit, on the other hand, was a pace stalker, skilled at holding with the pack before destroying the field with late acceleration. From the scheduled walk up start, few gave him a chance to head War Admiral into the first turn. Smith knew these things, and had been secretly training Seabiscuit to run against this type, using a starting bell and a whip to give the horse a Pavlovian burst of speed from the start.

When the bell rang, Seabiscuit ran away from the Triple Crown champion. Despite being drawn on outside, Woolf led by over a length after just 20 seconds. Halfway down the backstretch, War Admiral started to cut into the lead, gradually pulling level with Seabiscuit, and then slightly ahead. Following advice he had received from Pollard, Woolf had eased up on Seabiscuit, allowing his horse to see his rival, and then asked for more effort. Two hundred yards from the wire, Seabiscuit pulled away again and continued to extend his lead over the closing stretch, finally winning by four clear lengths.

As a result of his races that year and the victory over War Admiral, Seabiscuit was named "Horse of the Year" for 1938. The only prize that eluded him was the Hundred Grander. 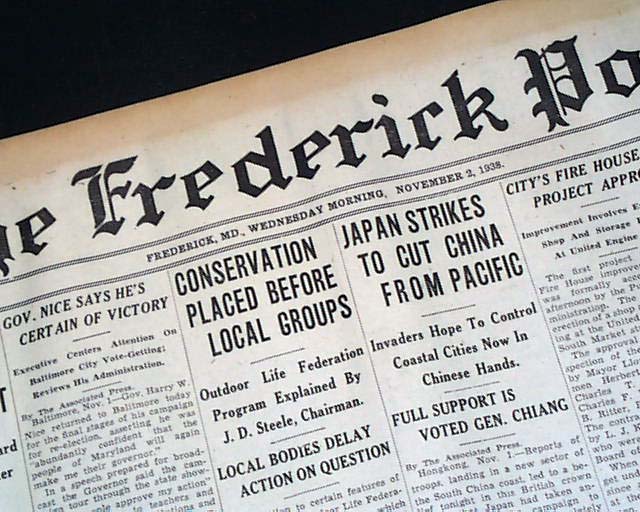 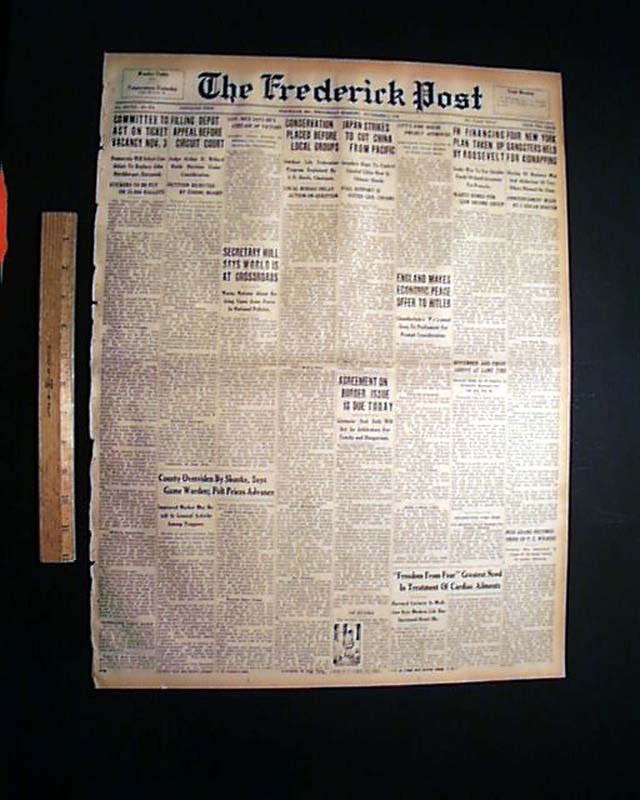 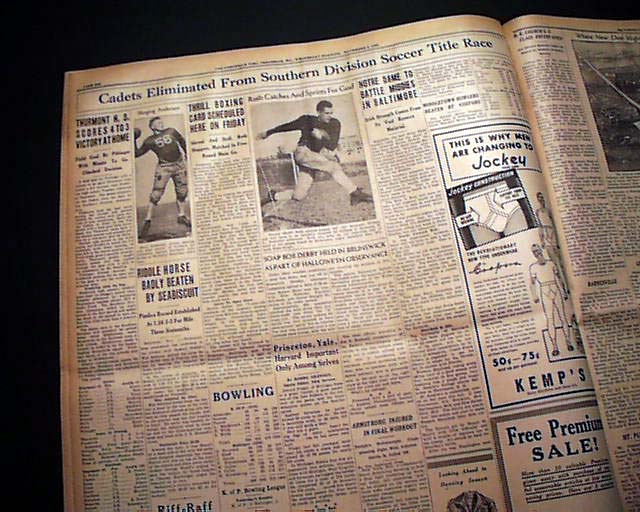 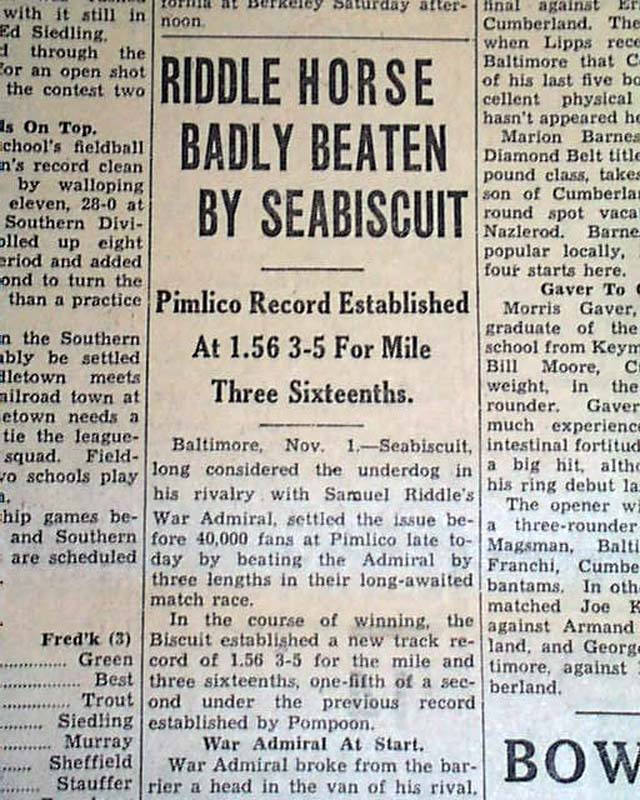 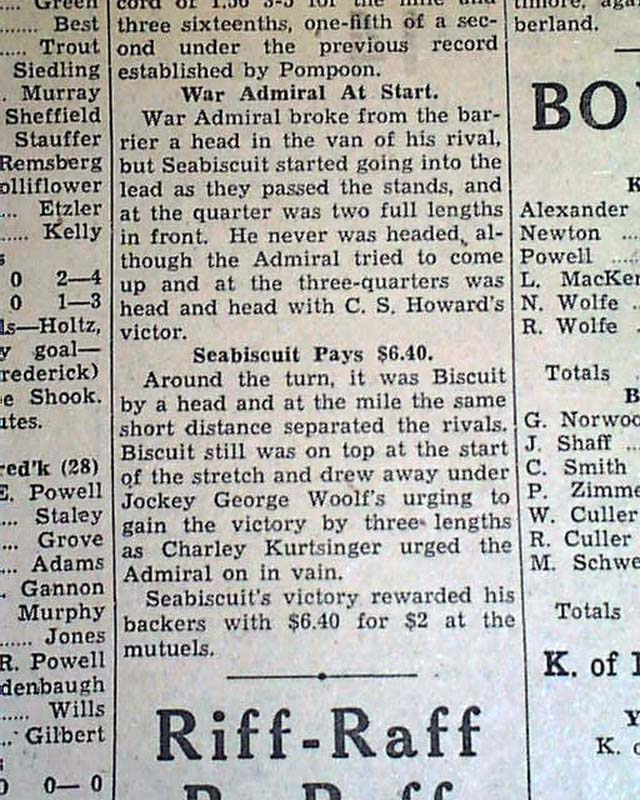 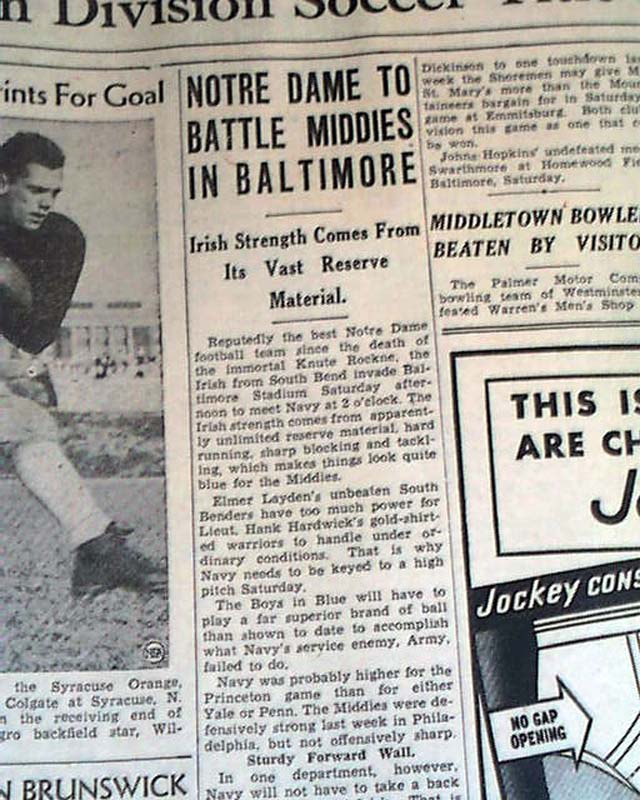