Home > Printed on board the ship that transported the President...
Click image to enlarge 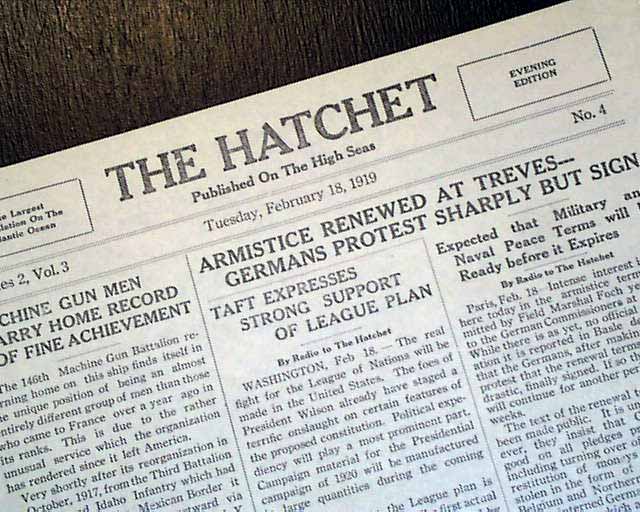 This is an interesting little newspaper printed on board the U.S.S. "George Washington".

As noted at the top of page 2: "A Daily Newspaper With The President Homeward Bound ", this ship carried President Woodrow Wilson across the Atlantic four times, twice eastbound to participate in World War I peace negotiations and twice westbound, returning him to the United States. It was the first major overseas trip by any American head of state.

Wilson's first trip on George Washington began at New York on December 4th. The transport's nine-day voyage brought her near Brest, France, where the President disembarked to continue his journey to Paris by rail. Following two months of negotiations, he reembarked on George Washington on February 15, 1919 to return to the United States. It was during this trip that this newspaper was published.

After but ten days at home, during which he endeavored without much success to build Congressional support for his diplomacy, on  March 5, 1919 President Wilson departed New York on George Washington to begin his second trip to Europe where negotiations with the other major allied powers proved so difficult that, on April 7, Wilson publicly inquired when George Washington could take him home. She was not immediately available, being actively employed returning U.S. service personnel from the former war zone. On June 29 Woodrow Wilson boarded USS George Washington for his final Atlantic voyage.

This issue is complete as a single sheet newspaper, measuring 8 by 9 inches & is in excellent condition.