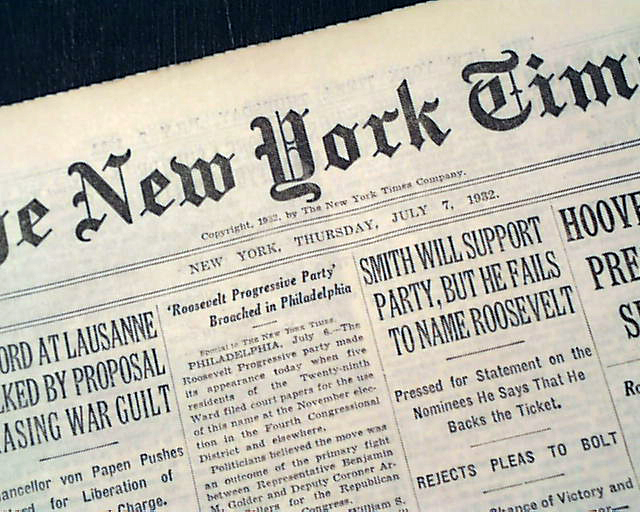 Newspaper has one column headlines on page 18: "BILL JURGES WOUNDED BY GIRL HE REJECTED" and "Chicago Cubs Player and Young Woman Are Shot in Struggle for Her Pistol". Tells of the shooting of Chicago Cubs' Shortstop William Jurges by his jilted girlfriend. Nice to have in this famous NYC title.

Other news of the day throughout. rag edition in great condition.

wikipedia notes: On July 6, 1932, Violet Valli, a showgirl with whom Jurges was romantically linked, tried to kill Jurges at the Hotel Carlos, where both lived. Jurges had previously tried to end their relationship. Valli (born Violet Popovich) also left a suicide note in which she blamed Cubs outfielder Kiki Cuyler for convincing Jurges to break up with her. Although initial reports stated that Jurges was shot while trying to wrestle the gun from Valli, later reports, based on Valli's suicide note, stated that she was trying to kill Jurges as well as commit suicide. This incident would form the basis for portions of Bernard Malamud's novel The Natural.

A week after the shooting, charges were dismissed against Valli when Jurges appeared in court and announced that he would not testify and wished to drop the charges. Valli was later involved in a lawsuit when she sued a real estate developer who was blackmailing her by threatening to release letters in which Valli threatened Jurges.