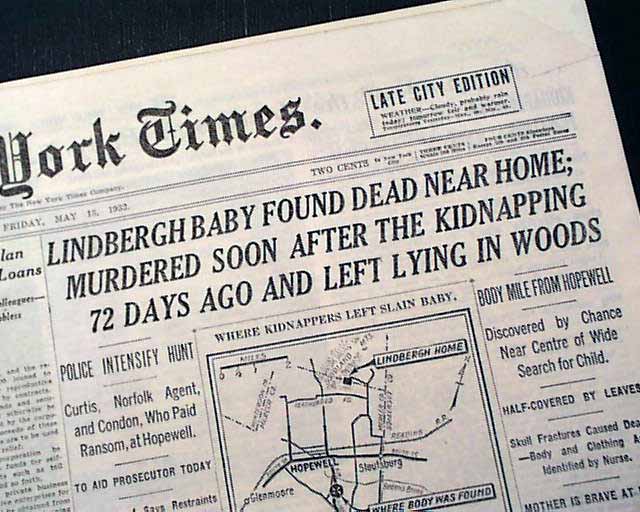 The May 13th issue is a  40 page newspaper that has a nice four column headline on the front page: "LINDBERGH BABY FOUND NEAR HOME; MURDERED SOON AFTER THE KIDNAPPING 72 DAYS AGO AND LEFT LYING IN WOODS" with many subheads that include: "BODY MILE FROM HOPEWELL" "Half-Covered By Leaves" and much more with related map.

Much more inside with photos. Loads of text. Too much to photograph.

As an extra bonus you get the following days issue (May 14th) which has 34 pages and has more reporting on the death of Charles Lindbergh Jr. (see photos for some content)

Other news of the day throughout. Both issue are in the rag edition and in very nice condition.

wikipedia notes: On May 12, 1932 delivery truck driver William Allen pulled his truck to the side of a road about 4.5 miles (7.2 km) from the Lindbergh home. He went to a grove of trees to relieve himself and there he discovered the corpse of a toddler. Allen notified police, who took the body to a morgue in nearby Trenton, New Jersey. The body was badly decomposed and it was discovered that the skull was badly fractured. The left leg and both hands were missing and there were signs that the body had been chewed on by various animals as well as indications that someone had made an attempt to hastily bury the body. Lindbergh and Gow quickly identified the baby as the missing infant based on the overlapping toes of the right foot and the shirt that Gow had made for the baby. They surmised that the child had been killed by a blow to the head. Mr. Lindbergh was insistent on having the body cremated afterwards.

Once the U.S. Congress learned that the child was dead, legislation was rushed making kidnapping a federal crime. The Bureau of Investigations could now aid the case more directly.

In June 1932 officials began to suspect an "inside job" in that someone the Lindberghs trusted may have betrayed the family. Suspicions fell upon Violet Sharp, a British household servant of the Lindbergh home. She had given contradictory testimony regarding her whereabouts on the night of the kidnapping. It was reported that she acted nervous and suspicious when questioned. She committed suicide on June 20, 1932 by ingesting a silver polish that contained potassium cyanide just prior to what would have been her fourth time being questioned. After her alibi was confirmed, it was later determined that the possible threat of losing her job and the intense questioning had driven her to commit suicide. At the time the police investigators were criticized for what some felt were the "heavy handed" police tactics used.

Following the death of Violet Sharp, John Condon was also questioned by police. Condon's home was searched as well but nothing was found that tied Condon to the crime. Charles Lindbergh stood by Condon during this time as well.