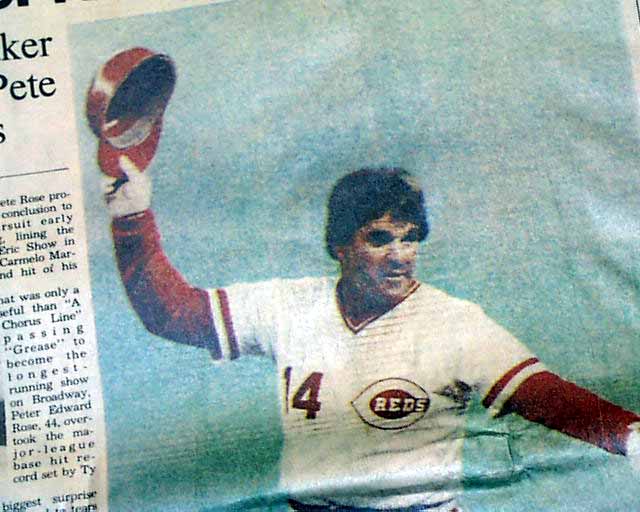 This 48 page, 2 sections only newspaper has a three column headline on the front page: "Rose: No. 4,192" with subhead: "Ty-breaker leaves Pete in Tears" and related photos. (see)

Also a nice banner headline on the front page of the sport's section: "Record-setting hit singularly Rose" with nice photo of the historic at bat.

This issue contains the 1st and sport's sections of a 5 section issue for a total of 48 pages. Nice condition.

wikipedia notes: On September 11, 1985, Rose broke Ty Cobb’s all-time hits record with his 4,192nd hit, a single to left-center field off San Diego Padres pitcher Eric Show. According to its Web site, MLB.com, Major League Baseball continues to recognize Cobb's final hit total as 4,191, though independent research has revealed that two of Cobb's hits were counted twice. Because of this, it has been suggested that Rose actually broke Cobb's record against the Cubs' Reggie Patterson with a single in the first inning of a Reds' 5-5 called game against Chicago on September 8. Because Rose broke Cobb's record, ABC's Wide World of Sports named Rose as its Athlete of the Year that year. Rose accumulated a total of 4,256 hits before his final career at-bat, a strikeout against San Diego’s Goose Gossage on August 17, 1986.