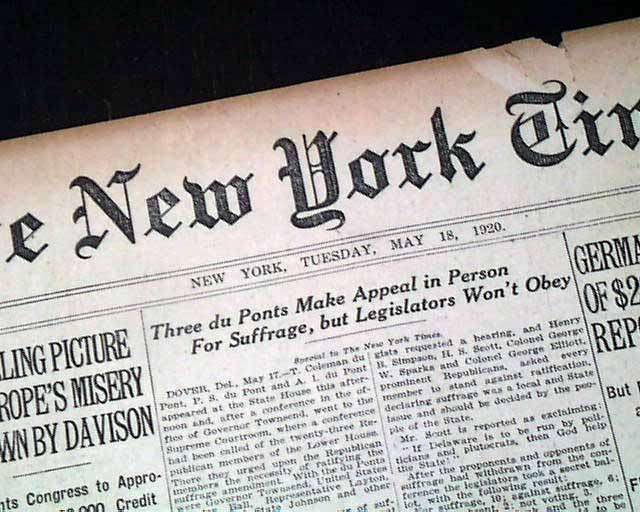 Tells of the goring and death of famous Spanish matador Jose Gomez Ortega.

Other news of the day. Usual browning with little margin wear. Should be handled with care.

wikipedia notes: José Gómez Ortega (May 8, 1895—May 16, 1920), commonly known as Joselito or Joselito el Gallo, or Gallito, was a Spanish matador in the early twentieth century. He was born in Seville in the famous neighborhood of La Macarena. His father was the matador Fernando Gómez García, known as "El Gallo". He was the younger brother of the matador Rafael Gómez Ortega, also known as "El Gallo". He was a strong admirer of the Virgin Macarena.

Joselito was the youngest bullfighter to receive the title of matador, at the age of 17. Joselito followed in archrival Juan Belmonte's footsteps and the two helped give the period the title, Golden Age of bullfighting.

Joselito was fatally gored in the ring at the age of 25 during a competitive bullfight with his brother-in-law, the matador Ignacio Sánchez Mejías. The day he died will also be remembered for being the only day in which the Virgin Macarena wore black clothes.

Belmonte and Gómez are widely considered to be the two greatest bullfighters ever.