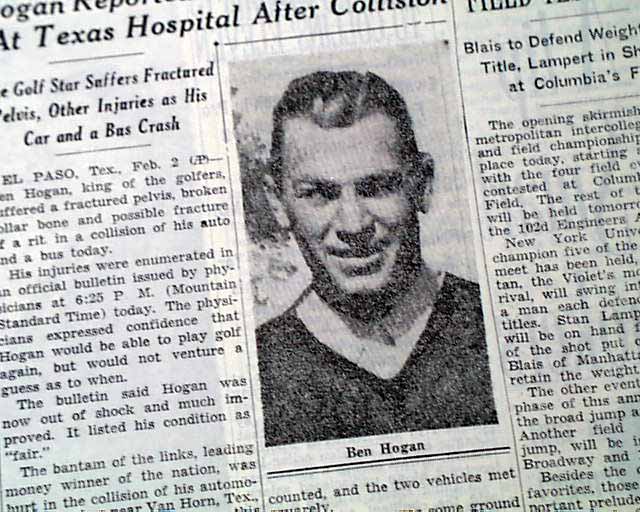 This 48 page newspaper has a two column headline on page 29: "Hogan Reported in 'Fair' Condition At Texas Hospital After Collision" with subhead: "The Golf Star Suffers Fractured Pelvis, Other Injuries as His Car and Bus Crash" with a one column photo of Hogan as well.

wikipedia notes: Between the years of 1938 through 1959, Hogan won 63 professional golf tournaments despite his career's being interrupted in its prime by World War II and a near-fatal car accident. Hogan and his wife, Valerie, survived a head-on collision with a Greyhound bus on a fog-shrouded bridge east of Van Horn, Texas on February 2, 1949. Hogan threw himself across Valerie in order to protect her, and would have been killed had he not done so, as the steering column punctured the driver's seat.

This accident left Hogan with a double-fracture of the pelvis, a fractured collar bone, a left ankle fracture, a chipped rib, and near-fatal blood clots: he would suffer lifelong circulation problems and other physical limitations. His doctors said he might never walk again, let alone play golf competitively. He left the hospital on April 1, 59 days after the accident.