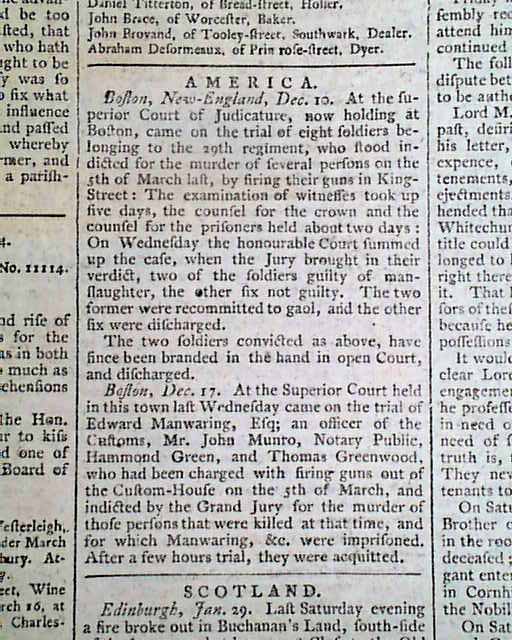 THE LONDON CHRONICLE, England, February 5, 1771  Page 2 has a nice report under the heading: "America - Boston, New-England" concerning: "...the trial of eight soldiers belonging to the 29th regiment, who stood indicted for the murder of several persons on the 5th of March last, by firing their guns in King Street...when the jury brought in their verdict, two of the soldiers guilty of manslaughter, the other six not guilty. The two former were recommitted to gaol & the other six were discharged..." with more on this as well (see).
A separate report from Boston dated a week later notes: "...came on the trial of Edward Manwaring...an officer of the Customers, Mr. John Munroe...Hammond Green, and Thomas Greenwood, who had been charged with firing guns out of  the Custom House on the 5th of March & indicted by the Grand July for the murder of those persons that were killed at that time..." with a bit more (see).
A perfect issue to be paired with a report on the Boston Massacre.
Complete in 8 pages and in very nice, clean condition.