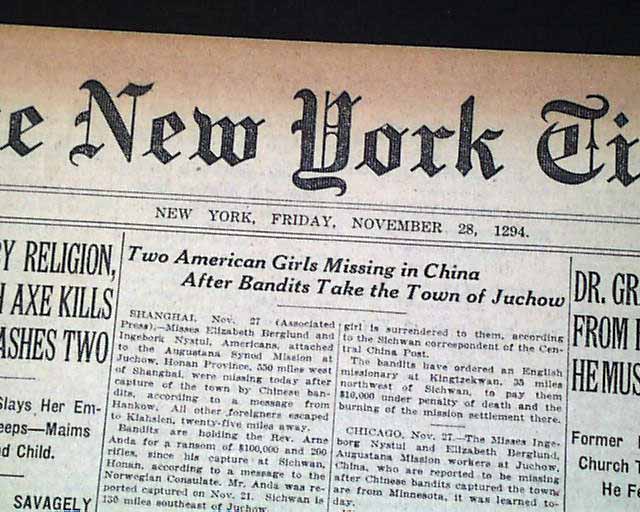 This newspaper reports that very first event, with a pg. 15 one column head reading: "Great Santa Claus As 'King Of Kiddies' " "Crowds Cheer Him in Parade & Witness Coronation in Macy's New Store" "Floats In The Pageant" "Visit to City on Thanksgiving Day Marks Unveiling of Big Christmas Window" with the article taking just short of half a column.

A very significant newspaper on the beginning of this annual tradition, and terrific to have in this famous New York City newspaper. Also a nice illustrated advertisement for Macy's department store. (see)

You get the complete 32 page newspaper which has it's usual browning with little margin wear, otherwise good.

wikipedia notes: In the 1920s many of Macy's department store employees were first-generation immigrants. Proud of their new American heritage, they wanted to celebrate the United States holiday of Thanksgiving with the type of festival their parents had loved in Europe.

In 1924, the annual Thanksgiving parade started by Louis Bamberger in Newark, New Jersey at the Bamberger's store was transferred to New York by Macy's. In New York, the employees marched to Macy's flagship store on 34th Street dressed in vibrant costumes. There were floats, professional bands and live animals borrowed from the Central Park Zoo. At the end of that first parade, as has been the case with every parade since, Santa Claus was welcomed into Herald Square. At this first parade, however, the Jolly Old Elf was enthroned on the Macy's balcony at the 34th Street store entrance, where he was then "crowned" "King of the Kiddies." With an audience of over a quarter of a million people, the parade was such a success that Macy's declared it would become an annual event.

Large animal-shaped balloons produced by The Goodyear Tire & Rubber Company in Akron, Ohio replaced the live animals in 1927 when the Felix the Cat balloon made its debut. Felix was filled with air, but by the next year, helium was used to fill the expanding cast of balloons.

As the finale of the 1928 parade, the balloons were released into the sky where they unexpectedly burst. The following year they were redesigned with safety valves to allow them to float for a few days.[1] Address labels were sewn into them, so that whomever found and mailed back the discarded balloon received a gift from Macy's [2]

Through the 1930s, the Parade continued to grow, with crowds of over 1 million lining the parade route in 1933. The first Mickey Mouse balloon entered the parade in 1934. The annual festivities were broadcast on local New York radio through 1941.

The parade was suspended for the duration of World War II, owing to the need for rubber and helium in the war effort. The parade resumed in 1945 using the route that it currently follows (see below). The parade became a permanent part of American culture after being prominently featured in the 1947 film, Miracle on 34th Street, which shows actual footage of the 1946 festivities. The event was first telecast nationally in 1952 (see below). On the NBC telecast from in front of the flagship Macy's store on Broadway and 34th Sreet,the marching bands perform live music but most of the other live acts such as songs from Broadway musicals use pre-recorded music with the performers lip-syncing their singing.

Macy's also sponsors the smaller Celebrate the Season Parade in Pittsburgh, Pennsylvania, held two days after the main event. Other cities in the US also have parades on Thanksgiving, but they are not run by Macy's. The nation's oldest Thanksgiving parade (the Gimbels parade, now known as 6abc-Ikea) was first held in Philadelphia in 1920. Other cities include the McDonald's Thanksgiving Parade of Chicago, Illinois and parades in: Plymouth, Massachusetts; Seattle, Washington; Houston, Texas; Detroit, Michigan; and Fountain Hills, Arizona. Since 1994, a "rival" of sorts, called the Parade Spectacular, has been run in Stanford, Connecticut, about 30 miles northeast of New York City. It is run on the Sunday before Thanksgiving to not directly compete with the Macy's parade and the balloon characters are not duplicated between the 2 parades. (Macy's in fact has sponsored this parade in a lesser fashion in the past.). Perhaps because of it's location in the New York metropolitan area, this parade gets up to 250,000 spectators per year and is the most-attended holiday balloon parade after the Macy's event [3]. However, it can only be seen on television via local cable within Fairfield County.

New safety measures were incorporated in 2006 to prevent accidents and balloon related injuries. One measure taken was installation of wind measurement devices to alert parade organizers to any unsafe conditions that could cause the balloons to behave erratically. Also, parade officials implemented a measure to keep the balloons closer to the ground during windy conditions.