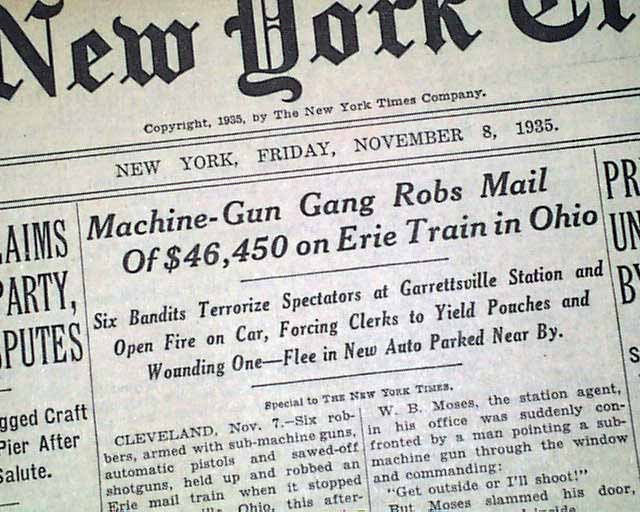 This 48 page newspaper has a two column headline on the front page: "Machine-Gun Gang Robs Mail Of $46,450 on Erie Train in Ohio" and subhead: "Six Bandits Terrorize Spectators at Garrettsville Station & Open Fire of Car, Forcing Clerks to Yield Pouches & Wounding One--Flee in New Auto Parked Near by"

Karpis was member of the Barker Gang, and was Public Enemy No. 1 at the time.

Other news, sports and advertisements of the day are within. Some browning at the edges, some small binding holes at the left spine, otherwise in good condition.

wikipedia notes: Just after Ma and Fred's death, Karpis nearly met his own violent end when the FBI located him in Atlantic City, New Jersey. Karpis and Harry Campbell managed to shoot their way to an escape, though Karpis's eight-month-pregnant girlfriend Dolores Delaney was hit in the thigh by a wild shot fired by Campbell. He continued his crimes with others, but had to be on the move more than ever as he was the fourth and last Public Enemy left (the previous three having been killed). He did manage to pull off a crime that echoed times of the "Old West", a train robbery in Garrettsville, Ohio, which netted $27,000. After the death of Ma and Fred, Karpis sent word to J. Edgar Hoover that he intended to kill Hoover the way Hoover had killed Ma and Fred.