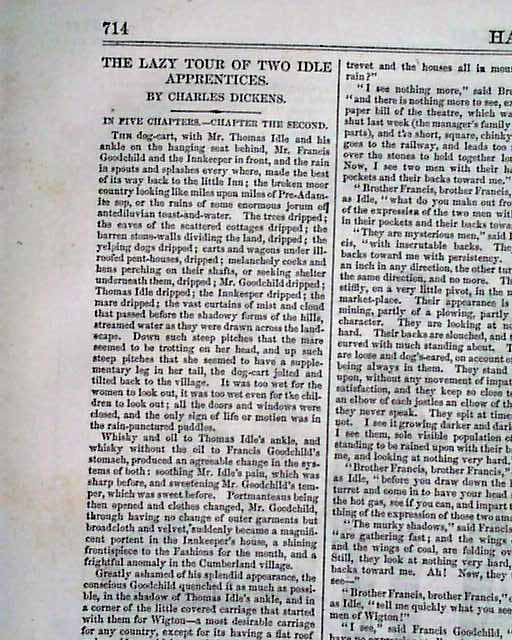 
Harper's Weekly set of 5 issues, dated weekly from October 31, 1857 through November 28, 1857, all featuring a serialized portion of "The Lazy Tour Of The Two Idle Apprentices", by Charles Dickens.  This is a great way to purchase the entire series, all five issues, for more than 20% off the single issue price.  The issues are individually described as follows:

Harper's WEEKLY, New York, Oct. 31, 1857 The front page shows: 'The Dry Goods Epidemic, Broadway at Three p.m.' Over one-third page shows: 'Run on the Seamen's Savings' Bank During the Panic', in Wall Street. Two pages with five illustrations: 'What to See at Manilla' in the Philippines. 'Travel Notes in Bible Lands' features several small illustrations and a nearly half-page "Beitedin - in Mount Lebanon - Residence of the Druse Emir". A full page article with several illustrations entitled "Caste, in India". "The Lazy Tour of Two Idle Apprentices" by Charles Dickens, the first chapter of five.

Harper's WEEKLY, New York, November 7, 1857 The front page features an article "Peace and War" and has two illustrations "What the united States Soldiers are Doing" and "What the British Soldiers are Doing". A fullpage shows six different Shawl fashion illustrations. Full page: 'At The Polls' shows a scene at the election polls. Two half page scenes of election day on the streets. "The War in India" features two illustrations. "The Lazy Tour of Two Idle Apprentices" by Charles Dickens, the second chapter of five.

Harper's WEEKLY, New York, November 14, 1857 Front halfpage illustration of "The Sovereigns at the Theatre at Stuttgardt" with accompanying article. Inside contains two large illustrations of "Rev. Charles Haddon Spurgeon" and "Rev. Charles Haddon Spurgeon Preaching to Thirty Thousand People at the Crystal Palace, England." Also inside, two illustrations pertaining to "Travel Notes in Bible Lands" including "Doorway to the Great Temple at Baalbec" and " Ruins of Baalbec, the City of the Sun." 24 small illus. pertaining to "A True Pictorial History of the Career of the Patagonian Cash and Confidence Co." Also, two 1/2 page illustration of "Street in Manilla After a Shower" and "Chinese Nurses on the Promenade at Manilla." (China). "The Lazy Tour of Two Idle Apprentices" by Charles Dickens, the third chapter of five.

Harper's WEEKLY, New York, November 21,1857 Large front page illustration of "Hon. Nathaniel P. Banks, Governor Elect of Massachusetts." Inside is a text article "More Filibusterism in Nicaragua" pertaining to.. "General William Walker, late President of Nicaragua, has left New Orleans with four hundred men to renew the struggle in that republic." Inside contains a large map of "Plan of the City of Delhi and the British Beleaguering Camp. Also a nearly full page illustration of "English Homes in India 1851." Double page centerfold of "Grand State Procession at Delhi, with Rajah, Elephants, and Armed Followers." 1/4 page illustration of "William Makepeace Thackeray" with accompanying article. "The Lazy Tour of Two Idle Apprentices" by Charles Dickens, the fourth chapter of five.


Charles Dickens... Dr. Livingstone... Brigham Young...
Harper's WEEKLY, New York, November 28, 1857 The frontpage article: 'Dr. Livingstone's Discoveries in Africa' includes a nice nearly half-page illustration of the famous 'The Victoria Falls of the Leeambye or Zambesi River, Called by the Natives Mosyoatunyo (Smoke-Sounding)'. A text article "The Mormon War" which is dealing with the quarrel over hostility committed by the Mormons on the October 9, 1857. Two other text articles "The War in Utah - Brigham Young's Declaration of War" and "The Mormon Proclamation" are also within this issue. Nice one-third page illustration: 'The Central Park as it Will be When Laid Out'. "The Capture of Delhi" features two illustrations on the double-page centerfold: 'General View of the City of Delhi, Just Taken by the British' and 'Plan of the City of Delhi, and the British Position Before the Assault'. "The Lazy Tour of Two Idle Apprentices" by Charles Dickens, the fifth and final chapter of five.