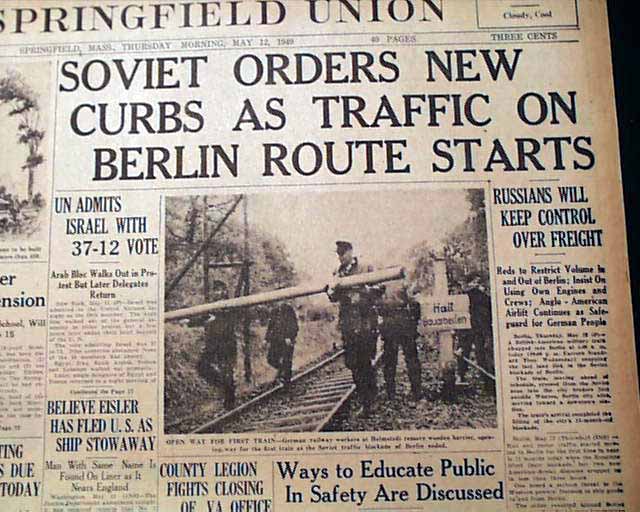 This 40 page newspaper has a five column headline on the front page: "SOVIET ORDERS NEW CURBS AS TRAFFIC ON BERLIN ROUTE STARTS" with subheads and related photo.

wikipedia notes: The Berlin Blockade (June 24, 1948 – May 11, 1949) was one of the first major international crises of the cold war. During the multinational occupation of post-World War II Germany, the Soviet Union blocked the three Western powers' railroad and street access to the western sectors of Berlin that they had been controlling. Their aim was to force the western powers to allow the Soviet controlled regions to start supplying Berlin with food and fuel, thereby giving them nominal control over the entire city.

In response, the Western Allies formed the Berlin Airlift to supply the city over pre-arranged air corridors. The effort was initially viewed with skepticism even in the countries mounting the attempt, as this sort of logistical effort had never been mounted before. The airlift to supply the German 6th Army at Stalingrad required 300 tons per day and rarely came even close to delivering this; the Berlin effort would require at least 5,000 tons a day, well over ten times as much. In spite of this, by the spring of 1949 the effort was clearly succeeding, and by April the airlift was delivering more cargo than had previously flowed into the city via rail.

The success of the Airlift was humiliating to the Soviets, who had repeatedly claimed it could never possibly work. When it became clear that it was, the blockade was lifted in May. One lasting legacy of the Airlift are the three airports in the former western zones of the city, which served as the primary gateways to Berlin for another fifty years.