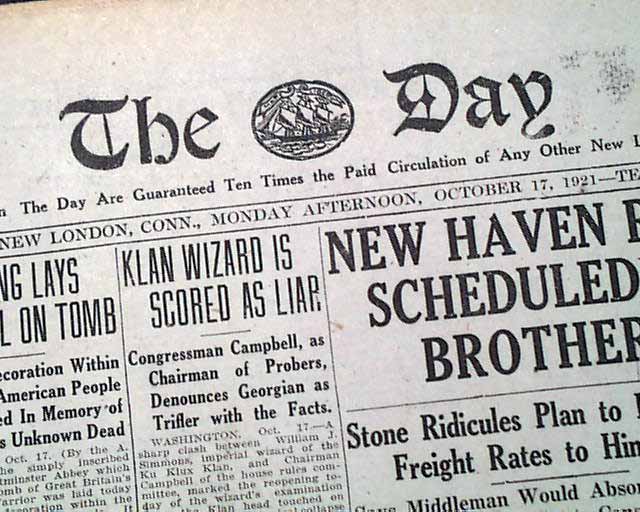 This 16 page newspaper has one column headlines on the front page: "KLAN WIZARD IS SCORED AS LIAR" and "Congressman Campbell, as Chairman of Probers, Denounces Georgian as Trifler with the Facts."

Other news of the day throughout. Some small binding holes along the spine, little browning, otherwise in good condition.

Simmons was born in Harpersville, Alabama, to Calvin Henry Simmons, a physician, and Lavonia David. He served in the Spanish-American War and later claimed to have studied medicine at Johns Hopkins University. He became a preacher for the Methodist Episcopal Church, South but was suspended by the church in 1912 for inefficiency.

Simmons later became a member of two churches and twelve different fraternal organizations. He was known as Joe, "Doc" (in reference to his medical training) or "Colonel" (referring to his rank in the Woodmen of the World).[2]

Convalescing after being hit by an automobile in 1915, Simmons concerned himself with rebuilding the Klan, which he had seen depicted in the newly released film The Birth of a Nation. He obtained a copy of the Reconstruction Klan's "Precept," and used it to write his own prospectus for a reincarnation of the organization. He delayed his plans, however, until the media-inspired lynching of Leo Frank, the accused murderer of Mary Phagan. This horrific incident became a flash point for anti-Semitic feeling in Georgia. Frank was taken from prison and hung by a mob who lynched him on August 16, 1915. The lynch mob called themselves the Knights of Mary Phagan, and on October 16, they climbed Stone Mountain and burned a giant cross that was visible throughout the city. The imagery of the burning cross, which had not existed in the original Klan, had been introduced via The Birth of a Nation. The film, in turn, had obtained the image from the works of Thomas Dixon. He had taken his inspiration from Scottish clans, who had burned crosses as a method of signalling from one hilltop to the next. The image also occurs in Lady of the Lake by Walter Scott.

As the nucleus of his revived Klan, Simmons organized a group of men. This included many of the Knights of Mary Phagan, in addition to two elderly men who had been members of the original Klan. Fifteen of them went to the Stone Mountain with Simmons on Thanksgiving Night of 1915 to burn a cross and inaugurate the new Klan.[2] Simmons' later account of the founding included a dramatic account of "a temperature far below freezing," although weather records showed that the temperature had never fallen below 45 degrees that night on Stone Mountain. Simmons declared himself the Imperial Wizard of the Invisible Empire of the Knights of the Ku Klux Klan. The second Ku Klux Klan was founded.

In the first years of the new Klan just several thousands members enrolled but eventually Klan became more popular and hundreds of thousands of new members pledged allegiance to the hooded order. The Klan's enemies were Blacks, Jews, Roman Catholics or anybody else who was not a native-born White Anglo-Saxon Protestant.[2]

When New York World exposed Klan violent affairs Simmons was called to testify in front of the U.S. House Committee on Rules. Hearings began in October 1921 and lasted for over a week. Simmons distanced himself from violent events and stressed Klan's fraternal nature. Congressional hearings ended with no direct consequences for the Klan.

Hiram Wesley Evans succeeded Simmons in the position of the Imperial Wizard in November 1922. Simmons was at the same time elected Emperor for life.[3]