Home > First report of the Great London Fire... In a London newspaper!
Click image to enlarge 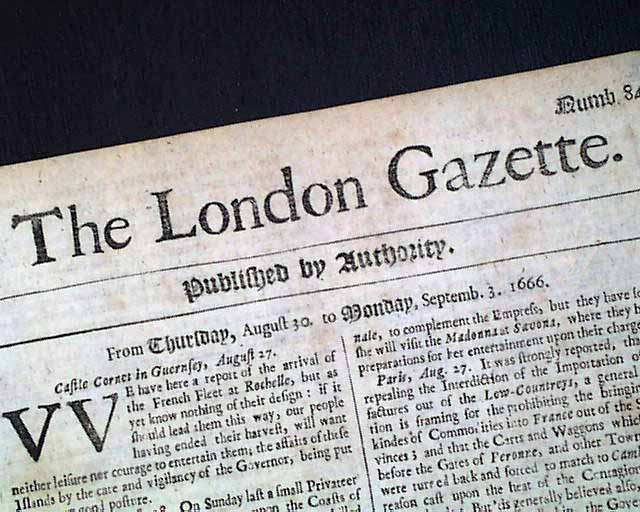 
THE LONDON GAZETTE, September 3, 1666  This issue certainly ranks as one of the premiere issues of all 17th century newspapers, announcing one of the most tragic events of the period.
This issue was published during the outbreak of what would be known as the Great London Fire, which destroyed much of the city of London. Since it was an early report, the article is found at the bottom of the back page of this single sheet issue, beginning with the dateline: "London, Sept. 2 About two o'clock this morning a sudden and lamentable fire brake out in this City which continues still with great violence, and hath already burnt down to the ground many houses thereabouts..."  with further details (see).
The Great Fire of London, a major conflagration that swept through the central parts of London from Sunday, September 2 to Wednesday, September 5, 1666, was one of the major events in the history of England. The fire gutted the medieval City of London inside the old Roman City Wall. It threatened, but did not reach, the aristocratic district of Westminster (the modern West End), Charles II's Palace of Whitehall, and most of the suburban slums.  It consumed 13,200 houses, 87 parish churches, St. Paul's Cathedral, and most of the buildings of the City authorities. It is estimated that it destroyed the homes of 70,000 of the City's 80,000 inhabitants. The death toll from the fire is unknown and is traditionally thought to have been small, as only a few verified deaths were recorded. This reasoning has recently been challenged on the grounds that the deaths of poor and middle-class people were not recorded anywhere, and that the heat of the fire may have cremated many victims, leaving no recognizable remains.
One can only imagine what the owner of this actual newspaper thought holding this issue in their hands and reading the report of the fire. I would suspect that the tragedy was well advanced already with the full impact & extent of the fire not to be know until two days later. Did the owner leave town? Did the owner survive? This newspaper was in the hands of a London citizen the morning after the fire began!
It is extremely significant to find this early report in a London newspaper, and is almost certainly the very first report of the disaster.
Also on the back page of this issue is a report concerning the Great Plague (see).
The issue measures 7 by 11 inches and is in very nice condition. An exceeding scarce and desirable item, and certainly a cornerstone  17th century newspaper for the very best of collections.