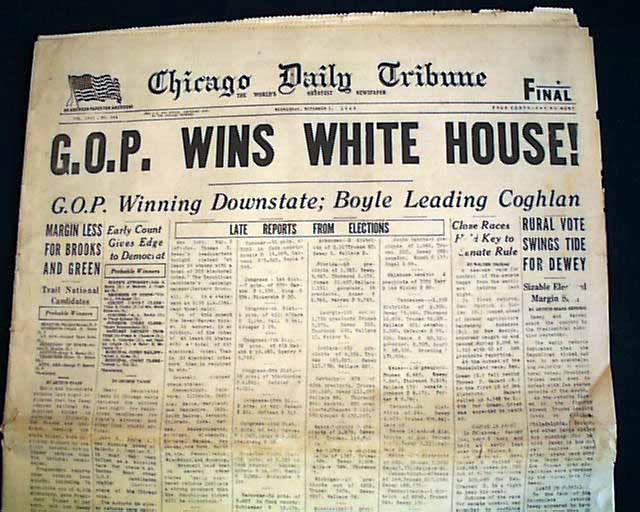 Perhaps the most recognizable headline of the 20th century is that which appeared on the front page of this title and date--but an earlier edition. It read: "DEWEY DEFEATS TRUMAN", made famous by the photo showing Harry S. Truman smiling and holding that famous newspaper.

This is the "Final" one star edition printed the very same day but slightly later. The editors saw fit to soften the phrasing a bit, still not aware of the true final outcome of the election, by proclaiming: "G.O.P. WINS WHITE HOUSE"

The text in the last column on the front page begins: "Dewey and Warren swept the country in the Presidential election yesterday. The early returns indicated that the Republican ticket had won by an overwhelming majority of electoral votes. President Truman went down to defeat with few states outside of the south..." with more.

It is our experience that this edition is much more rare than the more famous one, as we've sold more than 50 issues of  "Dewey Defeats Truman" but this is only the second issue of this edition we have had in 30 years.

Complete with both sections, some wear at the edges and the central fold with minor breaks with archival mends to pg. 2 causing no loss of text. A piece from the right center edge had been torn away but has been archivally repaired with just a tiny piece missing partially affecting one word (see photos).

A very rare companion issue to the more famous headline.