Home > The Little Belt affair, leading to the War of 1812...
Click image to enlarge 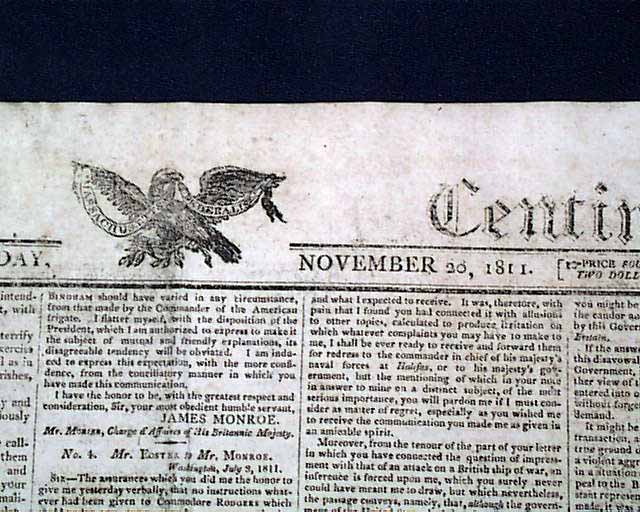 The front page has various correspondences between--& signed in type by-- James Monroe and British Minister A. J. Foster under the heading "Affair of the Little Belt", which was a contentious issue about the disabling of this ship & the killing of many seamen. The British ultimately do not accept compensation for this situation and this issue would be one more problem leading to the War of 1812. This text carries over to pg. 2 where there is even more such correspondence. Complete in 4 pages, thick-stock newsprint, nice condition.

Historical Background: The Little Belt Affair was a naval battle on the night of May 16, 1811. It involved the American frigate USS President and the British sixth-rate HMS Little Belt, a sloop-of-war, which had originally been the Danish ship Lille Belt (literally, "Little Belt"), before being captured by the British in the 1807 Battle of Copenhagen. The incident took place off of the North Carolina coast. The Little Belt Affair was also one of many incidents and events that led to the War of 1812.