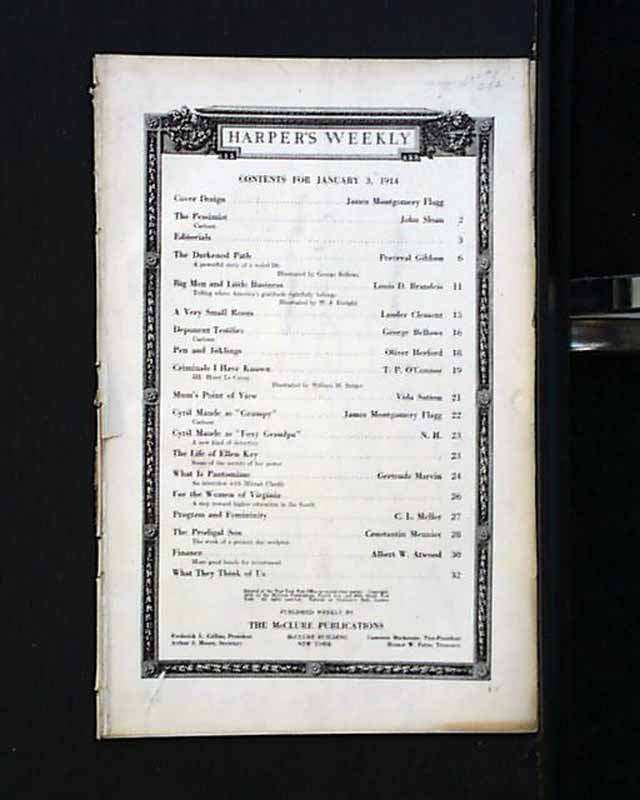 In this issue there is an illustration titled "The Pessimist" by John Sloan. There are several articles in this issue including "The Darkened Path" by Perceval Gibbon which includes an illustration by George Bellows; "Big Men and Little Business" by Louis D. Brandeis; "A Very Small Room" by Lauder Clement; "Criminals I Have Known" by T. P. O'Connor; "Cyril Maude as 'Foxy Grandpa'"; "The Life of Ellen Key"; "What is Pantomime?" by Gertrude Marvin; "For the Women of Virginia" and "Progress and Femininity" by  C. L. Meller plus much more.

There are also several illustrations in this issue including the double page illustration titled "Deponent Testifies that He is No Longer a Sinner" by George Bellows; "Pen and Inkings" by Oliver Herford; "Cyril Maude as 'Grumpy'" by James Montgomery Flagg and there is a photo of a statue called "The Prodigal Son" by Constantin Meunier plus there is a nice full page car ad.