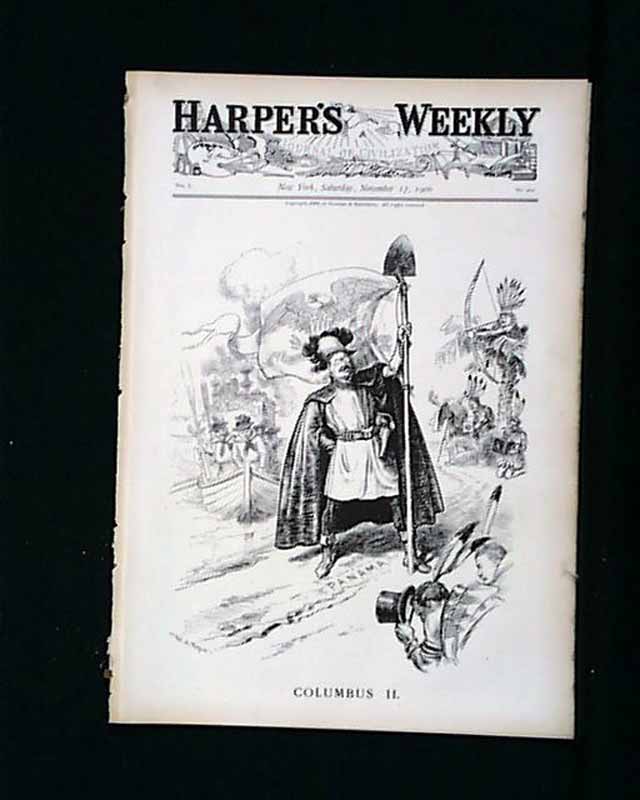 
HARPER'S WEEKLY, New York, November 17, 1906 There is a front page illustration, "Columbus II." by W. A . Rogers. There is an article and photos of "Keeping the peace Along the Mexican Border" by Carl M. Rathbun. In this issue is a full page illustration of "Another Great Bridge Which is Slowly Thrusting its Steel Arm Across the East River Between New York and Long Island" by Vernon Howe Bailey. There is another article with photos of "How Ireland is Solving the Problem of Her Poor" by Sydney Brooks. In this issue, there is also an illustration of "Building the SkyScraper-II.--Introducing the Structural Iron Work" by Albert Levering and photos of "Notable Horsewomen Whose Presence Will Add to the Brilliancy of This Year's Show in Madison Square Garden"; "Some of the Prominent Horsemen who will be in the List of Exhibitors at Next Week's Horse Show"; "The Calamitous Hurricane on the Florida Coast" and other advertisements of the day are included as well. See photos for full details.