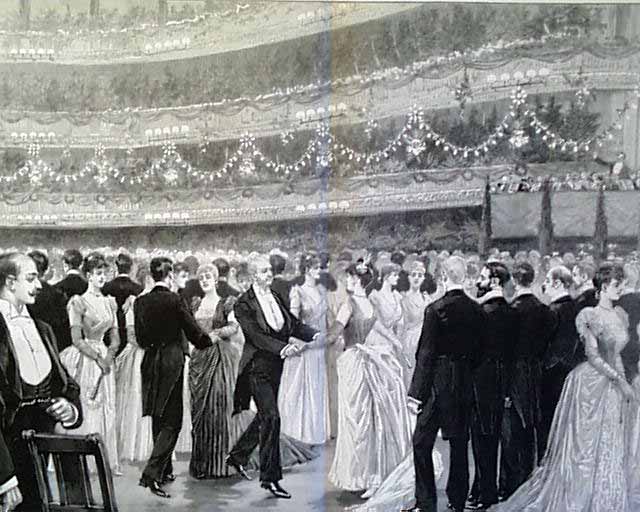 
HARPER'S WEEKY, New York, January 18, 1890  Front full pg. illus. of "Mme. Lilli Lehmann-Kalisch, in the Title Role of Goldmark's Opera 'The Queen of Sheba'." Inside is a full pg. illus. of "The Pulitzer Building, the New Home of the New York 'World'." 1/2 pg. illus. of "In the Cave of the Dead."
Doublepage centerfold: "The Sir Roger De Coverley (Quadrille D'Honneur) at the New Year's Ball in the Metropolitan Opera House." Three 1/4 pg. portraits of "The Late Dowager Empress Augusta of Germany," "The Late William D. Kelley, Member of the House of Representatives from the Fourth District of Pennsylvania," and "The Late Amzi s. Dodd, of New York."
Full pg. illus. of "The Annual Dinner of the Holland Society of New York." 1/4 pg. portrait of "Hon. Calvin S. Brice, Senator Elect From the State of Ohio."
Four pgs. of illus. pertaining to "The Clubs of Boston."