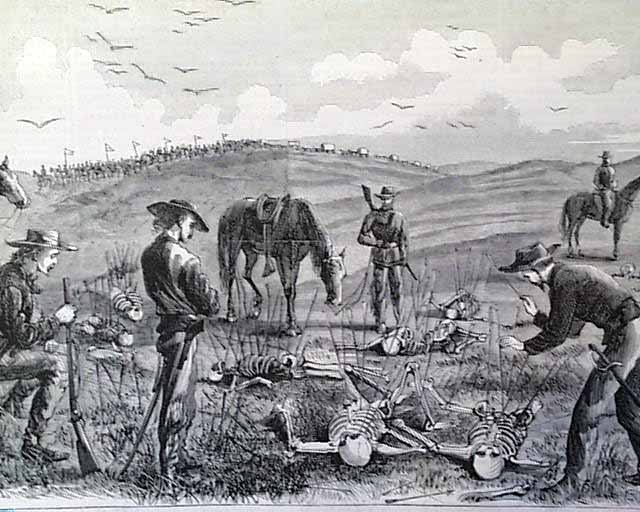 
HARPER'S WEEKLY, New York, Aug. 17, 1867  The entire front page has an article: "Indian War Scenes" with illustrations captioned: "Pawnee Killer & His Braves" and: "Discovering the Remains of Lt. Kidder and Ten Men of the Seventh U.S. Cavalry" which includes an illustration of George A. Custer.
Other prints within include: "Sioux Indians Attacking a Company of the Seventh Cavalry" "Camp Pets of the 7th U.S. Cavalry" "Sioux & Cheyennes Attacking a Wagon Train" "The Centenary Festival of Saint Peter at Rome--The Canonization of Saints in the Presbytery of Saint Peter's" "A Picnic In the Country" "The Beach at Coney Island" "Hollywood Cemetery, Richmond, Virginia--Decorating the Graves of the Rebel Soldiers" & a print of "The Late Charles Anthon of Columbia College".
Complete in sixteen pages.