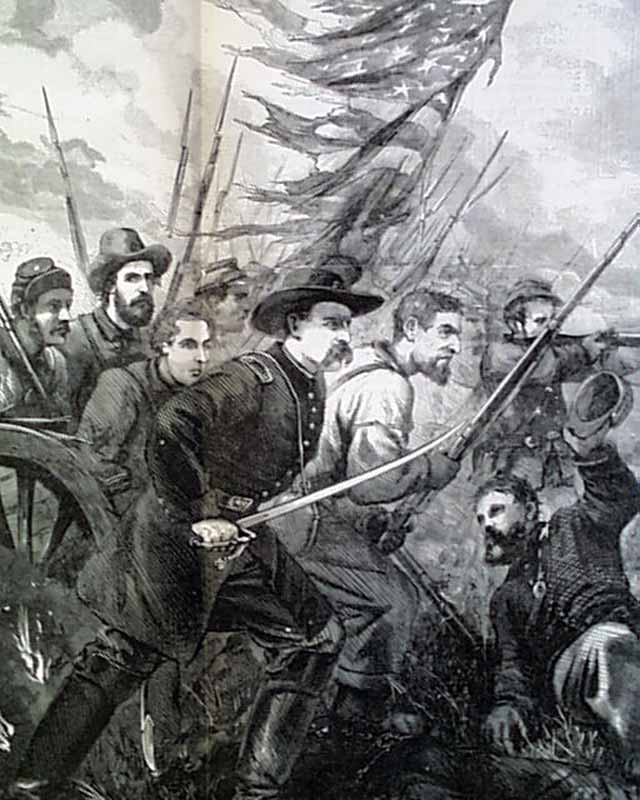 
HARPER'S WEEKLY, New York, June 18, 1864  The front page is taken up with 3 prints: "Porter's Gunboats Passing the Dam in the Red River, Near Alexandria" and 2 scenes of: "Rebel Cruelty--Our Starved Soldiers" which has a related article on page 3 & an editorial: "Further Proofs of Rebel Inhumanity".
Other prints within include: "The Campaign in Georgia--Charge of Logan's Troops at the Battle of Resaca" "...Robinson's Brigade of Hooker's Corps Saving the Fifth Indiana Battery" "Geary's Division Digging the Guns Out of a Rebel Battery Before Resaca..." "The Campaign in Virginia--Canvass Pontoons on the North Anna River" "Burning of the Fredericksburg & Richmond Railroad Bridge Over the North Anna" "Second Corps Batteries in Position on the North Anna River" "...A fireproof in the Wilderness, on the Spot of General Sedgwick's Death" "Disembarkation of General Smith's Troops at White House" "...Fight at Cold Harbor--General Smith's Corps In Action".
The doublepage centerfold is a very nice and dramatic print by famed artist Thomas Nast, captioned: "The Campaign in Virginia, On To Richmond!"
The back page has a cartoon: "Just So!" which shows Abraham Lincoln and others. Complete in 16 pages.