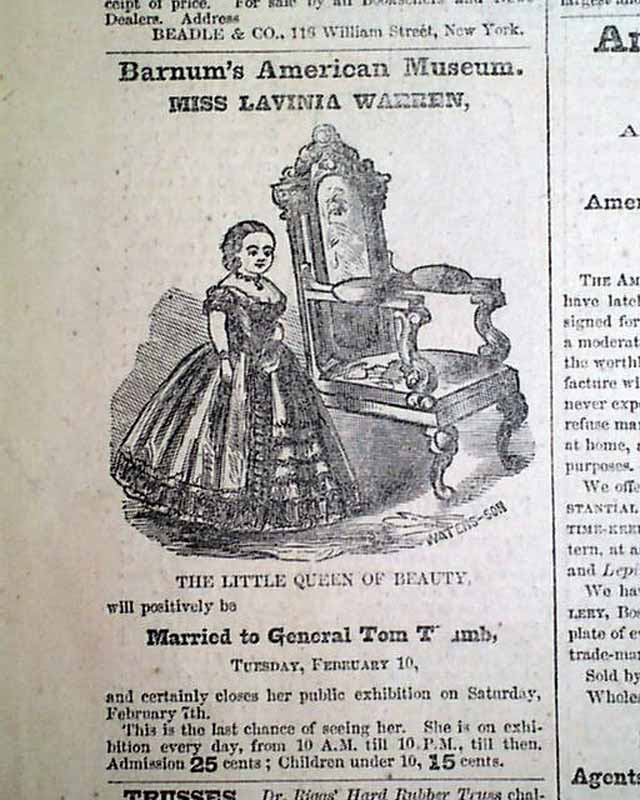 Item # 172648 HARPER'S WEEKLY, New York, February 7, 1863  The full front page is taken up with prints of: "Rear-Admiral David D. Porter, Commanding Mississippi flotilla" and "Major-General John A. M'Clernand" as well as a nice print showing: "Bombardment of the Post of Arkansas, January 11, 1863."
Inside contains a full page with 3 view of: "Our New Western gunboats--Lafayette--Choctaw--Indianola". Also: "Torpedo In the Western Rivers" "Stockade on the Louisville & Nashville Railroad" "Major-General Joseph Hooker, the New Commander of the Army of the Potomac" "Meeting of Union & Rebel Pickets in the Rappahannock"; a full page: ":The United States Ironclad Monitor 'Weehawken' in the Storm of 20th January"
The very d4ramatic doublepage centerfold is by Thomas Nast captioned: "Historic Examples of Southern Chivalry, Illustrated  by Thomas Nast--Dedicated to Jeff Davis" showing has 11 vignettes of various scenes of barbarism.
The back page has 2 cartoons: "Great News" and "One of the Effects of the War". There is also an illustrated ad showing; "Miss Lavinia Warren, The Little Queen of Beauty" in Barnum's American Museum, and who will be married to General Tom Thumb. Complete in 16 pages.