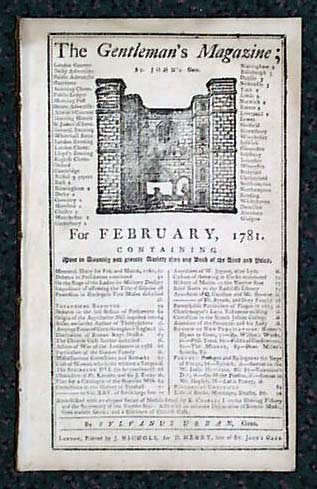 GENTLEMAN'S MAGAZINE, London, Feb., 1781  Inside in the "Historical Chronicle" section is report mentioning the famous Green Mountain Boys as well as Ethan Allen, the leader of this regiment (shown in the photo). The report reads in part: "Letters...from America import, that Ethan Allen, formerly a rebel colonel...has marched off with six hundred of the Green-mountain boys, as they style themselves, and joined Major Carlton at Ticonderoga..."  Reports mentioning Ethan Allen are not that uncommon but it is rare to find references to the Green Mountain Boys. Nice to have both in the same report.
Other Revolutionary War reports in this issue as well including portions reading: "...confirmation of the revolt of the Pennsylvania line from General Washington's army with his Excellency Gen. Clinton's proposals to them..." and "The corps ordered to be in readiness passed over to Staten Island the 5th where they were cantoned in readiness to move..." and "...revolted troops still remained at Trenton & were entrenching themselves there...The number of the Pennsylvania troops is said to be about 1300; and the grievances they complain of are that they had not received either pay, clothing or provisions." with more.
Also: "...an account of the defeat of the rebel Gen. Sumpter who, having passed the Broad River & joined Branan, Clarke, etc. had increased his corps to one thousand men...Lt. Col. Tarleton would have surprized him on the south of Ennorce had not a deserter gfiven notice of his march..." and much more
Measures about 5 by 8 1/2 inches, 44 pgs., full title/index page with an engraving of St. John's Gate in the masthead.