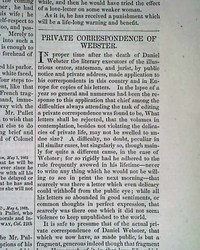 Item #679332
HARPER'S NEW MONTHLY MAGAZINE, New York, Aug., 1867  The prime feature of this issue is likely the 5 1/2 pages dedicated to the: "PRIVATE CORRESPONDENCE OF DANIEL WEBSTER", which includes excerpts from many of his private correspondence along with background and commentary. The article serves well as an unofficial biography of this great "defender of the Constitution".... See More 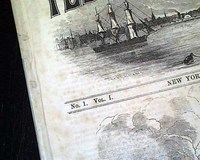 
ILLUSTRATED NEWS, New York, Jan. 1, 1853  This is the very first issue of what would become a short-lived publication which had "P.T. Barnum, Special Partner" involved in its publication, as noted on one of the back pages.
This is one of the earliest illustrated periodicals in the United States, preceding both Leslie's Illustrated and Harper's Weekly.  The format would... See More 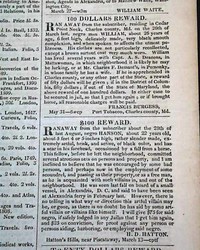 
NATIONAL INTELLIGENCER, Washington, D.C., June 27, 1833  The top of page 3 has: "Slavery In The United States" which is a state signed in type: Daniel Webster, in which he states his views on the issue. It includes in part: "...In my opinion the domestic slavery of the Southern States is a subject within the exclusive control of the States themselves...Congress has no authority... See More 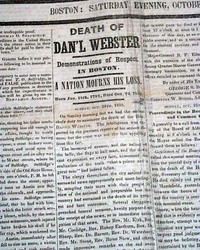 Much text on the death of Daniel Webster...

The top of a ftpg. column is headed: "DEATH OF DAN'L WEBSTER" "Demonstration of Respect In Boston" "A Nation Mourns His Loss".
An incredible amount of related text as over half of the ftpg. related to Webster's death, and almost all of page 2 does as well.
A great paper for th... See More 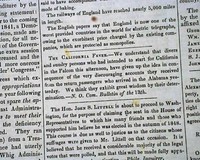 Page 3 has a small item: "The California Fever" which notes: "...that divers & sundry persons who had intended to start for California...have given up the idea in consequence of the very discouraging accounts they received from the return passenger... See More 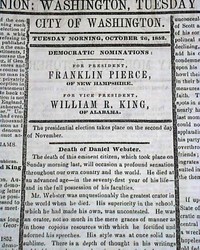 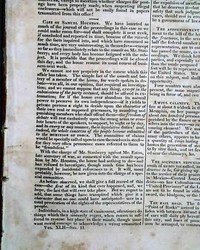 
NILES' WEEKLY REGISTER, Baltimore, April 28, 1832  Within this issue is an article headed: "Case Of Samuel Houston" which is concerning his trial for flogging William Stanberry. This report is quite lengthy, taking almost 6 pages, with a portion including: "...At the moment of stepping on the side walk Mr. Houston stood before me. I think he called me by my name, and i... See More 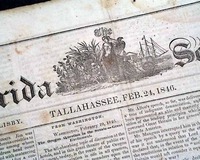 A very early newspaper from the capital of Florida, and with a nice engraving in the masthead. This newspaper is formatted much like most newspapers of the day, being complete in four pages with various local and national news reports in addition to many advertisements. This issue is among the we have in our inventory... See More 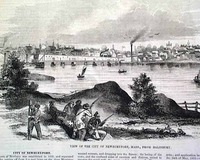 Many prints of Newburyport...


GLEASON'S PICTORIAL, Boston, Nov. 13, 1852  The front page shows a: "View of the Putnam Free School, At Newburyport, Mass." with a related article. Other prints inside include:"Portrait of Hon. Abbott Lawrence" "Mammoth Water-Cure Establishment of the West, at Harrodsburg, Ky." "View of the City of Newburyport, Mass., From Salisbury" "Essex Mer... See More 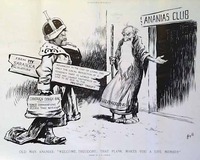 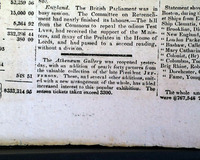 
COLUMBIAN CENTINEL, Boston, Massachusetts, May 21, 1828  A pg. 2 report says that Athenaeum Gallery was reopened "...with an addition of nearly forty pictures from the valuable collection of the late President Jefferson..." There is also a letter to the Mayor of Boston stating that Congress appropriated money for the preservation of Deer Island in Boston Harbor, and for the removal ... See More 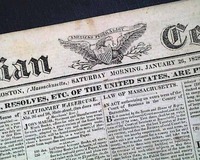 Listed among the page 3 obituaries is one that begins: "In New-York, on Monday Morning last, Mrs. Grace Webster, consort of the Hon. Daniel Webster, Member of the Senate of the United States, From Massachusetts. Her remains are to be removed to this City for interment..." and more, ... See More 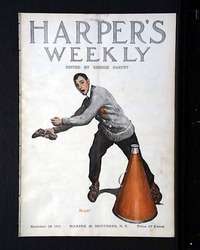 This issue has a full, color cover before the front page. The front page of this issue is a photo of "The Late Justice Harlan."

This issue is has a photo of "The Great American Game" and "A New Portrait of Lillian Nordica" and there is a photo spread of "The McNamara Trial." There is an illustration of &q... See More 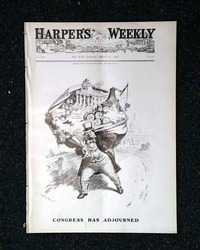 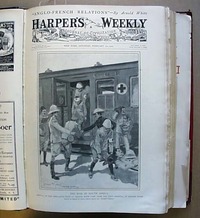 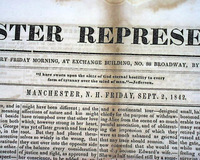 
MANCHESTER REPRESENTATIVE, Manchester, N.H., Sept. 2, 1842 On pg. 2 under "A Treaty" is the text of the Webster-Ashburton Treaty, signed in type: Ashburton & Daniel Webster. Treaty settled various disputes between the U.S. and Great Britain, including the northeastern boundary with Canada. Three areas of lite to moderate foxing, with a bit in the text of the treaty. 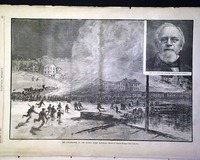 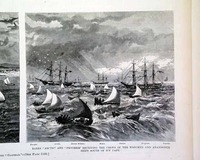 
HARPER'S WEEKLY, New York, Dec. 2, 1871  Full ftpg. political cartoon: 'The Tammany Tiger Strung Up' by the Justice figure. Inside has a fullpg. Th. Nast political cartoon: 'to Whom It May Concern'.
Nice doublepage centerfold: 'Destruction of the Whaling Fleet in the Arctic Ocean' shows 4 scenes. Fullpg. of 4 scenes: 'Our thanksgiving Bird'. Nearly fullpg:... See More 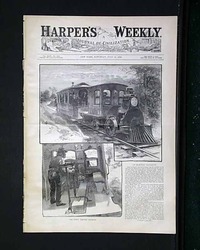 
HARPER'S WEEKLY, New York, July 15, 1882  Full front page print: "The Edison Electric Railroad" shows two illustrations of it, plus a short article. Full page has 4 scenes: "The Twenty-Third Regiment in the Camp of Instruction, Peekskill". Another full page with 8 scenes: "The Visit of the 7th Regiment to Buffalo". Halfpg print: "Dog-Catching in New York... See More 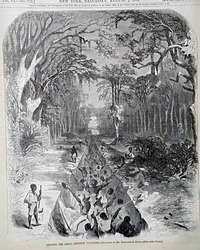 The battles before Richmond...


HARPER'S WEEKLY, New York, August 2, 1862  The entire front page is a print showing African-Americans: "Cutting the Canal Opposite Vicksburg".  Inside prints include: "View of The City of Vicksburg, Mississippi" "The City of Huntsville, Alabama" "The Battles Before Richmond--Ayers's Artillery (Smith's Division) Keeping the Rebels in Check at... See More 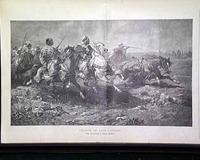 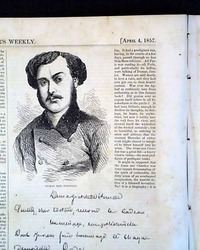 
HARPER'S WEEKLY, New York, April 4, 1857  The front page features an article entitled "After Walker, What Next?" Inside: 'The Story of India Rubber' includes an illustration of 'Charles Goodyear, the American Inventor' and illustrations of 'Tapping the Rubber Tree'. "An Albany Dutchman in Holland" which features several small illustrations.
Com... See More 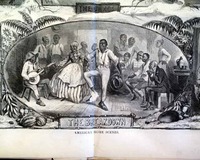 
HARPER'S WEEKLY, New York, April 13, 1861  The front page has a print of: "Mrs. General Gaines" as well as a view of "Point Isabella, Texas, with the 'Daniel Webster' sailing with U.S. Troops on Board". The doublepage centerfold shows six "American Home Scenes", which includes prints of "The Applecut" "The Dance" "Quilting&quo... See More 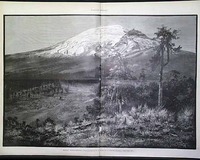 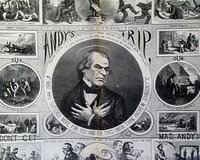 
HARPER'S WEEKLY, New York, Oct. 27, 1866 Half of ftpg. shows: 'Lady Lobbyists at the White House'. 'Sinking of the Daniel Webster' & 'Sinking of the Evening Star'. Nice dblpgctrfld. by Thomas Nast is a montage of political cartoons on Andrew Johnson. A fullpg. of four nice scenes in Texas, including Houston and Galveston. Halfpg; 'Faneuil Hall, Boston. Bkpg. pol... See More