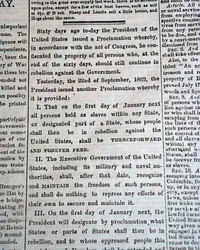 Page 4 contains the full texts of the Emancipation Proclamation, perhaps the most significant Presidential pronouncement of the entire Civil War wherein Lincoln declared all slaves free. Headed: "A Proclamation By the President of the United States" the document begins at the b... See More 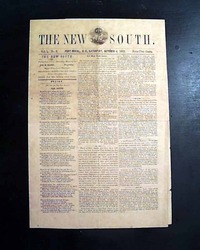 
THE NEW SOUTH, Port Royal, South Carolina, Oct. 4, 1862  This newspaper was established in March of 1862 after its capture by Union forces during the early part of the Civil War. Issued in a "military command", the newspaper sought to provide mostly military reports and other items. It is also interesting that a Union newspaper was published in South Carolina considering the state r... See More 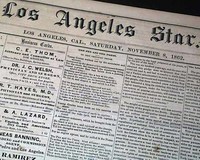 
LOS ANGELES STAR, California, Nov. 8, 1862  One of the earliest Los Angeles newspapers we have offered, and from the Civil War no less. At this time the population of Los Angeles was less than 5,000.
Articles include: "Making of Disloyalists of Missouri Pay the Fiddler--A Sweeping Order" "Another of General Butler's Stringent Orders Against New Orleans Secessionists" ... See More 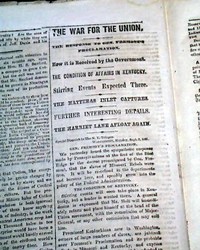 The war for the Union... On Fremont's proclamation...


NEW YORK TRIBUNE, Sept. 3, 1861  Among the Civil War reports on inside pages are: "THE WAR FOR THE UNION" "The Response to Gen. Fremont's Proclamation" "How It is Received by the Government" which relate to General Butler issue an emancipation proclamation without proper authority.
Also: "The Condition of Affairs in Kentucky" ""Another Vi... See More 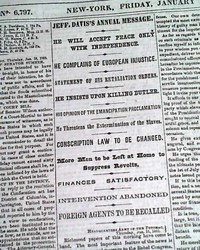 
NEW YORK TRIBUNE, Jan. 16, 1863  Among the one column headlines on the Civil War are several with comments on: "Jeff. Davis's Annual Message" "He Will Accept Peace Only With Independence" "Statement of His Retaliation Orders" "He Insists Upon Killing Butler" "His Opinion of the Emancipation Proclamation" He Threatens the Extermination of t... See More 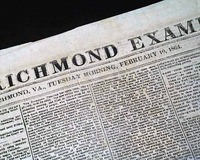 The ftpg. includes: "From Fredericksburg" which begins: "The path to Heaven is not more straight & narrow than that of a correspondent from the seat of war...The indications of activity in the Yankee army still continue..." and much more. Also on the ftpg: "City Intelligence&q... See More 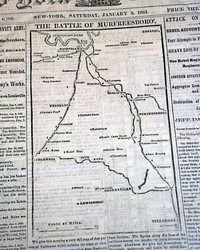 Although the front page has some great coverage of recent events in the Civil War--including a nice map headed: "The Battle of Murfreesboro"--the prime content is certainly on page 4 where the first column and a bit of the second contain the complete text of the Emanc... See More 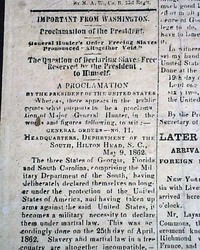 This is certainly one of the more rare newspapers from this Confederate state. It began in 1848 but ceased publication in 1862. Its editor, James Hunnicut, was a minister of a Free Will 'Union' congregation, was considered to be quite eccentric. As the war neared he became an outspoken Un... See More 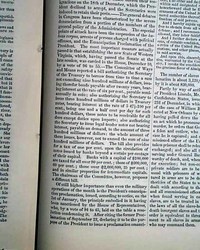 Item #656759
HARPER'S NEW MONTHLY MAGAZINE, New York, February, 1863  Towards the back of the issue under the "Monthly Record of Current Events" is content pertaining to the newly enacted Emancipation Proclamation.
Other items within the issue are "A Californian in Iceland" which includes several illustrations; "The Gun-Boat Essex" and many more articles and illustration... See More 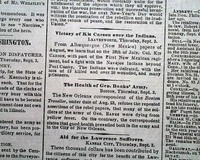 Although much of the front page is taken up with various reports from the Civil War, perhaps the most interesting item is the brief page 5 item headed: "Victory of Kit Carson Over the Indians" (see photos for full report), reading in part: "...had a fight with the Navajoe Indians beyond Fort Canby. The ... See More 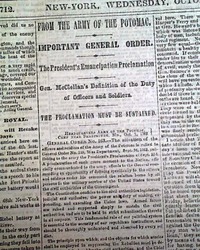 Item #651533
NEW-YORK DAILY TRIBUNE, October 8, 1862  Contains Major-General George McClellan's General Order No. 163 which instructed the officers and troops of the Army of the Potomac to uphold and adhere to President Lincoln's recently delivered Emancipation Proclamation. The order ends with, "In carrying out all measures of public policy this army will, of course, be guided by the sames o... See More 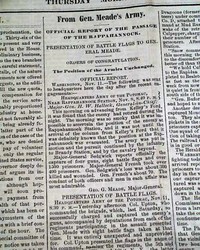 Victory at the Rappahannock... Lincoln letter to the ladies... 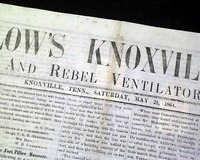 
BROWNLOW’S KNOXVILLE WHIG, AND REBEL VENTILATOR, Tennessee, May 21, 1864  Parson Brownlow was a fascinating personality to say the least. He regarded anyone who disagreed with him about religion or politics as an enemy. The circuit-riding Methodist parson turned to the press to spread his harsh anti-Presbyterian, anti-Calvinist rhetoric, and to spread his fervently held views on the inf... See More 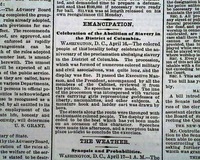 The front page has one column headings: "Emancipation Proclamation" "Celebration of the Abolition of Slavery in the District of Columbia"
Other news of the day. Complete in 8 pages, nice condition. 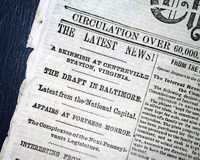 
PHILADELPHIA INQUIRER, Oct. 21, 1862  Among the front page one column heads on the Civil War are: "A Skirmish At Centreville Station, Virginia" "Interesting From the South" "Stuart's Raid into Pennsylvania the Comic Feature of the War" "The 'Thunderer' on the President's Emancipation Proclamation" "The War In The West" "Ad... See More 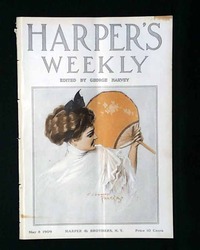 
HARPER'S WEEKLY, New York, May 8, 1909  There is a color cover on this issue.The front page of this issue has a photo of "The New "Sick Man of Europe"--Mahomet V."

This issue has a photos and an article on "Fostering Foreign Criminals" by Frank Marshall White and "The New Order in Turkey." There is a photo spread of "The Opening of the ... See More 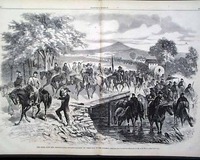 
HARPER'S WEEKLY, New York, November 1, 1862  The full front page shows: "The Town of Perryville, Kentucky, Scene of the Recent Battle" and "The Pirate 'Alabama'". Other prints inside include: "The Rebel Foray in Pennsylvania--General View of Chambersburg" and two other quarter page scenes at Chambersburg. Halfpg: "Camp Dick Robinson, Kentucky...&... See More 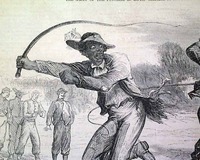 
HARPER'S WEEKLY, New York, January 17, 1863  Certainly the most historic content would be the page 2 complete printing of: "By the President of the United States of America - A Proclamation" which is the full text of the Emancipation Proclamation, signed in type by the President: Abraham Lincoln.
Half of the front page: "The Teamsters' Duel" showing two Black men ... See More 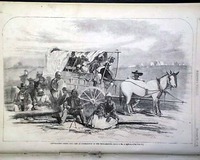 
HARPER'S WEEKLY, New York, January 31, 1863 The full front page is a print: "Army Beef" showing soldiers shooting cattle, with 2 smaller vignettes.
Inside has a full page: "Contrabands Coming Into Camp in Consequence of the Proclamation", referring to the recent Emancipation Proclamation. It shows many African-Americans and presumed slaves. Also a full page with 2 prints: ... See More 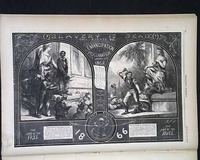 
HARPER'S WEEKLY, New York, January 12, 1867. The front of this issue is of a fullpage illustration "Isaac Watts and His Mother at the Prison-Gate" which has an accompanying article. Inside is an article "Frederick Douglass" which is a letter address to the Editor. Two quarter-page illustrations represent "The Foundling" and the "New York Foundlings" arti... See More 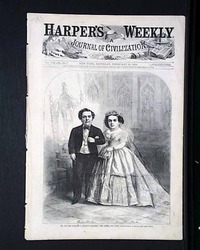 Marriage of Tom Thumb... Slaves escaping to the North...


HARPER'S WEEKLY, New York, February 21, 1863  The entire front page is a great (and rather famous) illustration of: "Mr. and Mrs. Charles S. Stratton (General Tom Thumb And Wife)." taken from a Brady photograph. Page 2 has an article on them.
Other prints within include a full page: "The Effects of the Proclamation--Freed Negroes Coming Into Our Lines At New Bern, North Ca... See More 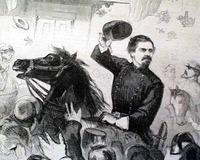