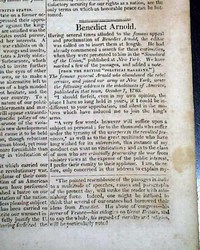 THE WEEKLY REGISTER, Baltimore, Jan. 29, 1814  Included is an article headed "Benedict Arnold" which is a piece in a British magazine prefaced with: "The famous general Arnold who abandoned the rebel service & joined our army at New York, wrote the following address to the inhabitants of America...Oct. 7, 1780." and what follows is the nearly full page letter signed
... See More 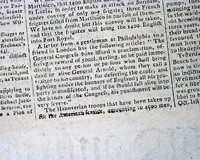 This is one of the more noteworthy issues of the Chronicle for the entire Revolutionary War, as it is the first issue in this title to announce the surrender of Lord Cornwallis at Yorktown, essentially ending the Revolutionary War.
Page 2 has a lett... See More 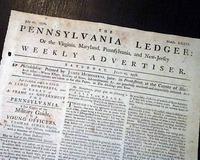 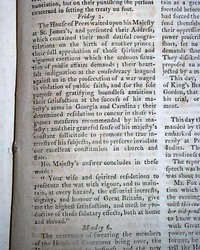 Within the "Historical Chronicle" near the back of the issue is a portion which notes: "...These gentlemen were reply'd to by others in opposition, who in thee accumstom'd style execrated the American war & denounced vengeance
... See More 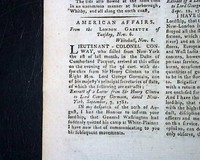 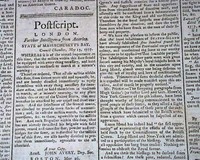 Four signed letters from Washington, one from Benedict Arnold, and so much more...


THE LONDON EVENING POST, England, Sept. 16, 1777  A great issue for American content as the entirety of page 2 is taken up with: "Authentic Intelligence from America".
Most of the content can be seen in the photos as too much to detail here, but a few comments regarding events at Lake George; mention that: "...300 Tories belonging to General Delancy's brigade at Fort Indep... See More 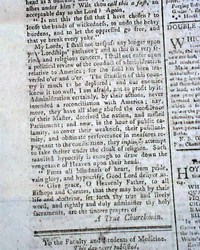 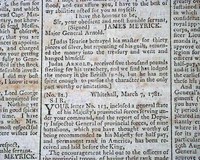 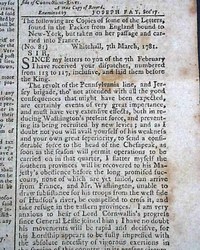 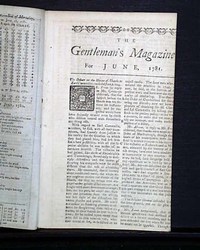 Item #657748
GENTLEMAN'S MAGAZINE, London, June, 1781  The issue begins with a continuation on the "Debate on the Motion of Thanks to Earl Cornwallis", mentioning: "...the victories he had gained, like those of Phila. & Ticonderoga, served only to multiply distresses..." with much more (see for portions).
Under the "Historical Chronicle" near the back is a lengthy &a... See More 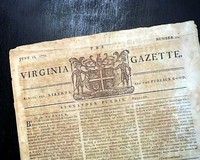 Benedict Arnold destroys the British fort at St. John's, Canada... Much on the troubles in America... The Gunpowder Incident...


THE VIRGINIA GAZETTE, Williamsburg, June 16, 1775  This newspaper was published Alexander Purdie, a distinction to be made since there were three newspapers of this title printed in Williamsburg during the early period of the Revolutionary War. A very rare opportunity for a scarce title from colonial Virginia.
The front page has a report which reports on the: "...The rise & progress... See More 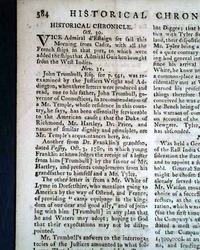 Item #653632
THE GENTLEMAN'S MAGAZINE London, December, 1780  The issue begins with 7 pages of "Proceedings in the Last Parliament" which includes discussion of the Revolutionary War in America.
Near the back in the "Historical Chronicle" is a lengthy items concerning John Trumbull, son of the governor of Connecticut, with some talk of Franklin's grandson, etc. Another report ... See More 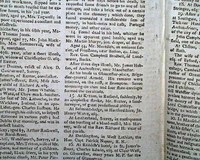 Death of the infamous Benedict Arnold, from the city where he died...

Item #653287
THE GENTLEMAN'S MAGAZINE, London, June, 1801 There is a very small & inconspicuous item near the back under the "Obituary with Anecdotes of Remarkable Persons" section an entry reading: "At his house in Gloucester place, Brigadier-general Arnold. His remains were interred on the 21st, at Brompton. Seven mourning coaches and four state carriages formed the cavalcade.&quo... See More 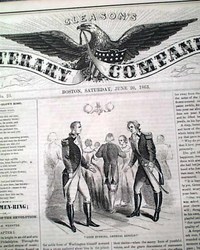 With a print of Benedict Arnold...


GLEASON'S LITERARY COMPANION, Boston, June 20, 1863  The masthead features a very large heraldic eagle with a 7 inch wingspan holding in its beak a banner with the title. Mostly filled with literary items including a ftpg. story: "The Omen-Ring, or The Traitor of the Revolution" which has a print showing Benedict Arnold. Another page has some tidbits relating to the Civil War.
... See More 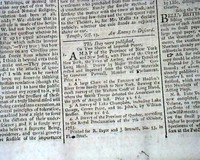 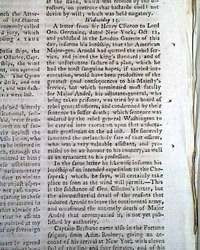 Item #636685
GENTLEMAN'S MAGAZINE, London, November, 1780  Within the "Historical Chronicle" near the back of the issue is a portion which notes: "...These gentlemen were reply'd to by others in opposition, who in thee accumstom'd style execrated the American war & denounced vengeance on those who had been the cause of it...all the evils with which we are not threatened,
... See More 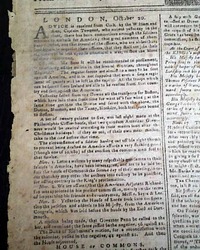 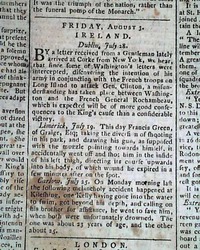 
THE LONDON CHRONICLE, England, Aug. 4, 1781  Page 2 has a report which includes: "...that since some of Washington's letters were intercepted, discovering the intention of his army in conjunction with the French troops on Long Island to attack Gen. Clinton, a misunderstanding has taken place between Washington and the French General Rochambeau, which is expected will be of more good ... See More 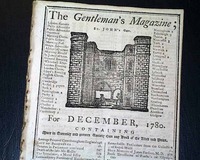 Item #582636
THE GENTLEMAN'S MAGAZINE London, December, 1780  The issue begins with 7 pages of "Proceedings in the Last Parliament" which includes discussion of the Revolutionary War in America.
Near the back in the "Historical Chronicle" is a lengthy items concerning John Trumbull, son of the governor of Connecticut, with some talk of Franklin's grandson, etc. (see photos). A... See More 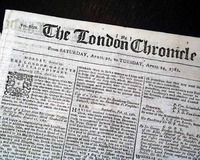 Page 2 has: "...letters from North Carolina bring advice that the majority of the inhabitants in that province have lately risen voluntarily on the side of loyalty & have seized upwards of 200 of the principal men who were known to be the most dist... See More 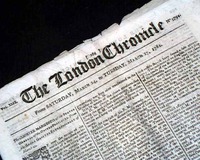 
THE LONDON CHRONICLE, England, March 27, 1781 Page 2 has an item referencing the famous naval battle involving John Paul Jones, with: "...Displeasures of his B.M. in regard to what has been done for Paul  Jones is equally groundless...". Another item on pg. 2 extending to pg. 3 includes: "...negociation intended to lay the plan of a treaty of commerce to be concluded between th... See More 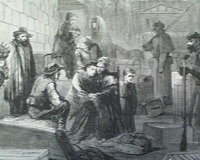