A "Diabolical Courant" newspaper within... Map of Northern Italy...

A "Diabolical Courant" newspaper within... Map of Northern Italy...

Reacting to the Boston Massacre...

A rare & desirable Loyalist newspaper... Reacting to the Intolerable Acts...

The Gunpowder Incident: in a Williamsburg newspaper... And so much more!

On the Battle of Bunker Hill... Washington named commander-in-chief.. So much more....

Two accounts of Bunker Hill, Washington becomes commander-in-chief, so much more. In a Virginia newspaper...

More on the American situation...

Culture of wine... The situation in America...

First-hand Accounts of the American Revolution

We offer an opportunity to own complete, genuine newspapers from the era of America's founding fathers. Read first-hand battle reports from including Lexington & Concord, Bunker Hill, Saratoga, Ticonderoga, and Valley Forge. Immerse yourself in significant political events, such as the Declaration of Independence, the âCauses and Necessity for Taking Up Arms,â Articles of Confederation, the Stamp Act, and other historical happenings. Read of soldiers protecting the liberty of their families; the British taking over our prized cities of Boston, Philadelphia, and New York; and the struggle of the 13 colonies as they fought to be freed from the tyranny of British rule and taxation.

The Relationship Between Great Britain and the Colonies

It's always interesting to get a glimpse into how the British newspapers reported news about âher charter colonies in America.â The London Chronicle published some terrific content on that topic in April 1774, and another article about taxing the American colonies containing the quote: âMight not America, under tax masters thus interested in their oppression, be deemed in a state of abject slavery?â 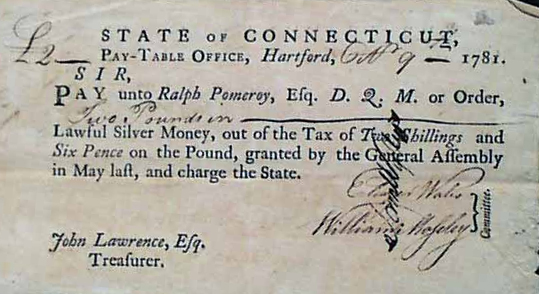 A Revolutionary War military pay document from 1781âa fascinating piece that would look great on display.

Hold History in Your Hands

It comes as a surprise to many that newspapers from the Revolutionary War that are 200-plus years-old are available for purchase, and are reasonable priced and well preserved. The reason that 18th century newspapers have held up so well is mostly because they were printed on durable rag linen. Rag linen was a common type of paper that was made from pulping linen rags often from ship sails or clothing. We invite you to read more about collecting Revolutionary War newspapers, and some insights into newspapers of the era, on our blog.

âWe hold these truths to be self-evident: that all men are created equal.â As printed in The Gentleman's Magazine dated August 1, 1776.