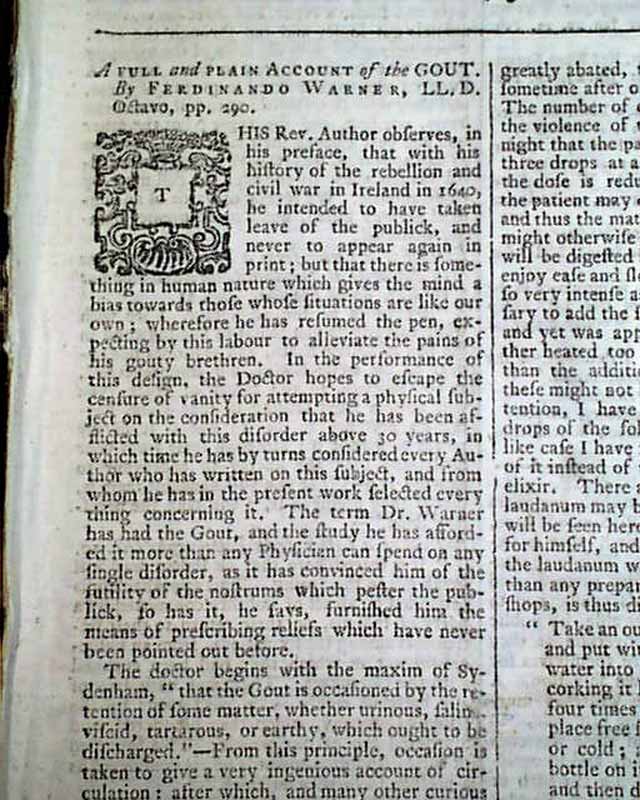 
THE LONDON CHRONICLE, January 19, 1768  Page 2 has a letter from Pittsburgh mentioning: "It is feared here that an Indian war will break out in the Spring...on an act of hostility committed by a party of Indians on their return to their settlements among the six nations, from an unsuccessful war in which they had been engaged with the Cherokees...they plundered & murdered ten of our people...". Then a letter from Niagara.
Page 6 has over a full column of news headed: "America" with datelines from Portsmouth, Newport, Philadelphia, and Boston. One item notes: "...Mr. Richard Bache...as married to Miss Sally Franklin, the only daughter of the celebrated Dr. Franklin, a young lady of distinguished merit...". Another report comments on the distressing situation with trade and the high duties, noting that the people of Boston: "...still persevere in their resolution to discourage the use of foreign superfluities as the only means of saving the country from impending ruin...".
Eight pages, 9 by 12 inches, minor rubbing, nice condition.