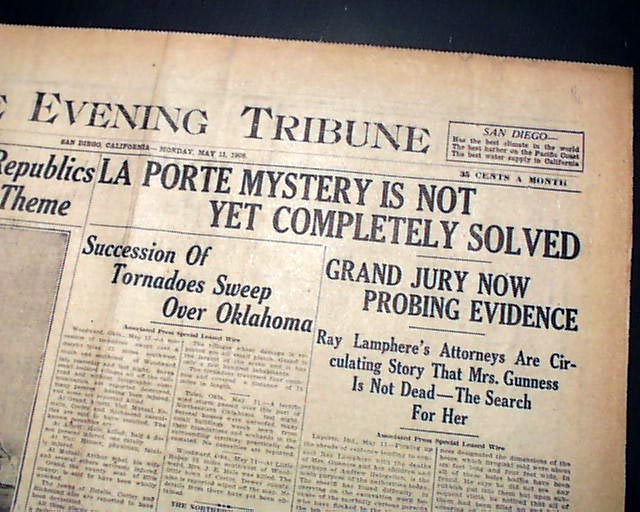 The top of the front page has a four column headline: "LA PORTE MYSTERY IS NOT YET COMPLETELY SOLVED" with subheads. (see). Surprisingly this issue is in good condition being from the "wood pulp" era. Very hard to find issues that are not totally fragile from this era in paper.
Complete with 8 pages, some small binding holes along the spine, minor margin wear, generally nice.

wikipedia notes: Belle Gunness was a Norwegian-American serial killer who was active in Illinois and Indiana between 1884 and 1908. Gunness is thought to have killed at least fourteen people, most of whom were men she enticed to visit her rural Indiana property on the promise of marriage, while some sources speculate her involvement in as many as forty murders. Gunness seemingly died in a fire in 1908, but it is popularly believed that she faked her death. Her actual fate is unconfirmed.
Belle Gunness was pronounced dead, but whether she died in the fire or did indeed escape remain matters of dispute and speculation, and reported "sightings" of Belle Gunness in the Chicago area continued long after she was declared dead. At the time, police looked into reports of women suspected to be Belle, none of which led to her apprehension. Recent DNA tests were performed on the headless corpse, but the results were inconclusive.
After Gunness' crimes came to light, the Gunness farm became a tourist attraction. Spectators came from across the country to see the mass graves, and concessions and souvenirs were sold. Moreover, the crime became an acknowledged part of area history: the La Porte County Historical Society Museum has a permanent “Belle Gunness“ exhibit.