Home > Back to Search Results > Great content from the closing months of the Revolutionary War...
Click image to enlarge 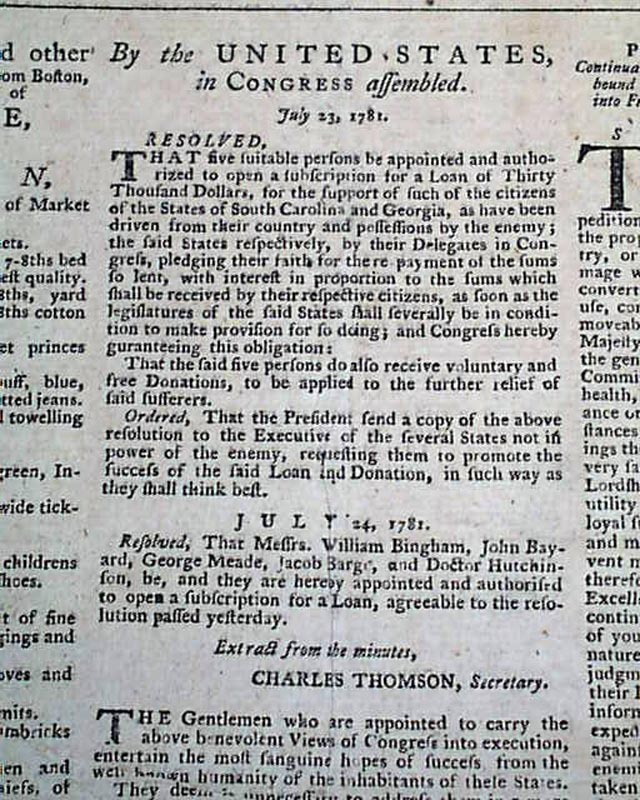 Great content from the closing months of the Revolutionary War...

A wonderful issue with a great wealth of war-related content from the closing months of the Revolutionary War.
The front page has a "Resolve" from the U.S. Congress concerning: "...the support of such of the citizens of the states of South Carolina and Georgia as have been driven from their country and possessions by the enemy...".
Additional front page reports concerning the war include: "...steps which were taken...to appointing commissaries of captures, upon your expedition to South Carolina, for the purpose of preserving the property of his Majesty's loyal subjects...or making them recompense for the losses or damage which they might sustain..." with more. Also: "...an account of the remains of provisions at New York: and informing them of a revolt having happened in Mr. Washington's camp...".
Page 2 begins with a letter from Lord Percy, which has a postscript: "Lord Percy's remarks in this letter cannot fail to open the eyes of every tory in America...". Also: "It is remarkable that no dispatches from Carolina have been published in the London "Gazette since the battle of Camden...several skirmishes have happened of considerable consequence, in favour of both sides." Further on is: "...a flag of truce from New York bound to Nantucket, put into this harbour..." and then a report from Fishkill concerning the battle at Tarrytown, with nice detail.
Page 3 continues with much fine content on the war, including a letter from Baltimore which begins: "Cornwallis having encamped near James Town, the Marquis sent General Wayne, with the Pennsylvania line, to take their station within a small distance of the British army & watch their motions..." with much more on the events in that arena of war.
Also: "The Commander in Chief is exceedingly pleased with the conduct of Major General Howe for marching with so much alacrity & rapidity to the defence of the stores at Tarry-Town & repulsing the enemy from thence..." with more detail.
Also an: "Extract from the Marquis La Fayette's General Orders" with other war-related items as seen in the photos provided.
Four pages, archivally rejoined at the blank spine, very nice condition.