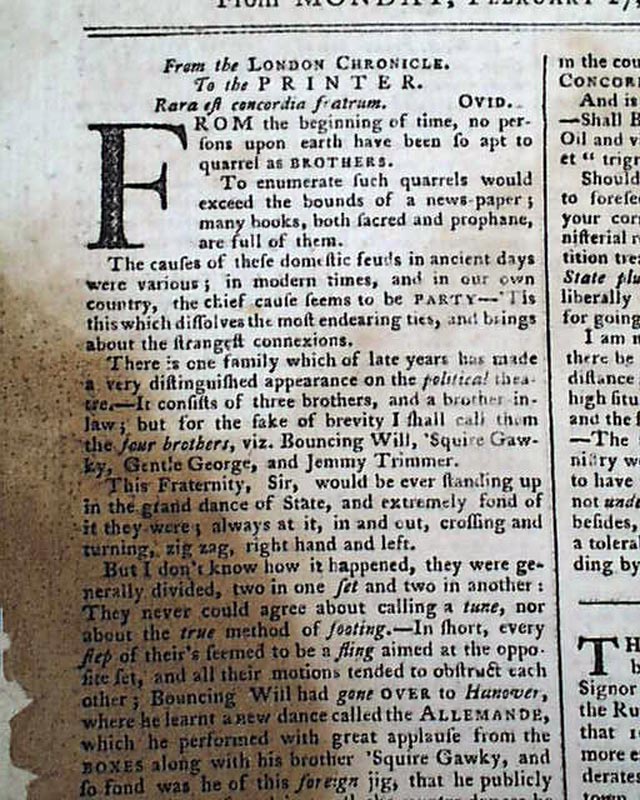 The front page has an interesting article about: "...George being now master of the ceremonies made the music play just as he pleased; and one night...he swore he would exhibit to the company a dance which had never been attempted but in North America. 'Twas in vain that his friends, observing the state of intoxication he was in, endeavoured to dissuade him...George Was obstinate...called aloud to the music to play up Yanky Doodle, but the fiddlers not playing fast enough..." with more.
This is the earliest mention we have seen of Yankee Doodle in a newspaper.
Inside has a year-by-year chart of: "Exports to the Continent of America From England..." and also a chart of: "Imports from the Continent of America to England...".
Further on is a report noting in part: "...Your troops, you may depend upon it, will all be called away in the spring & the ships too. Doctor F____ has given it as his opinion that the colonies will obtain all that they can desire or wish for if they behave with firmness...".
Eight pages, 9 by 11 1/4 inches, staining at the left side with loss at the blank spine has been professionally repaired (see photos), otherwise in nice condition.