Home > Back to Search Results > The King addressses Parliament on the dire situation in America...
Click image to enlarge 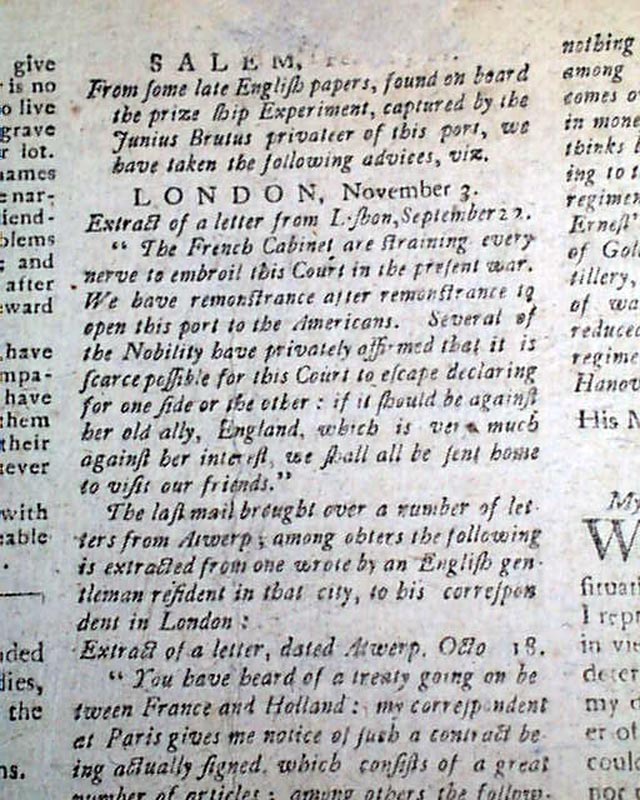 The King addressses Parliament on the dire situation in America...

This is certainly one of the less common titles from the Revolutionary War era.
Page 2 has a letter that notes in part: "...the Americans might yet be brought back to a constitutional subordination to this country!...". Also: "The troops destined for the American reinforcement for the campaign of 1782 are not yet finally determined on; but it is agreed on all hands that it is meant to be a very considerable one; some say 20, but none estimate it at less than 15,000."
Pages 2 and 3 contain the King's speech to Parliament dated Nov. 27, 1781 which reflects much upon the dire situation in America. A few bits include: "...determined to persevere in the defence of my dominions against the combined power of my enemies until such a pacification could be made...The war is still unhappily prolonged by that restless ambition which first excited our enemies to commence it...and it is with concern that I inform you that the events of war have been very unfortunate to my arms in Virginia, having ended in the loss of my forces in that province. No endeavours have been wanting on my part to extinguish that spirit of rebellion which our enemies have found means to foment & maintain in the colonies..." with more. The Virginia reference is to Cornwallis' surrender at Yorktown.
Page 3 has a report noting: "...arrived...at New York in a short passage from England, which...bought accounts that the news of the capture of Cornwallis had occasioned great disturbances in England...the British King had lodged himself in the Tower for the security of his person...". And then a comic note: "On the arrival of the news of the capture of Lord Cornwallis and his whole army, one African meeting another salutes him thus: "O! how do Cuffee? You hear about Cornwallis? No. What about Cornwallis? Why, General Washington shelled off the corn, now he Cobsallis."
Four pages, nice archival work with a transparent, protective overlay, very nice condition.