Home > Back to Search Results > Letters signed by Jefferson and Adams...
Click image to enlarge 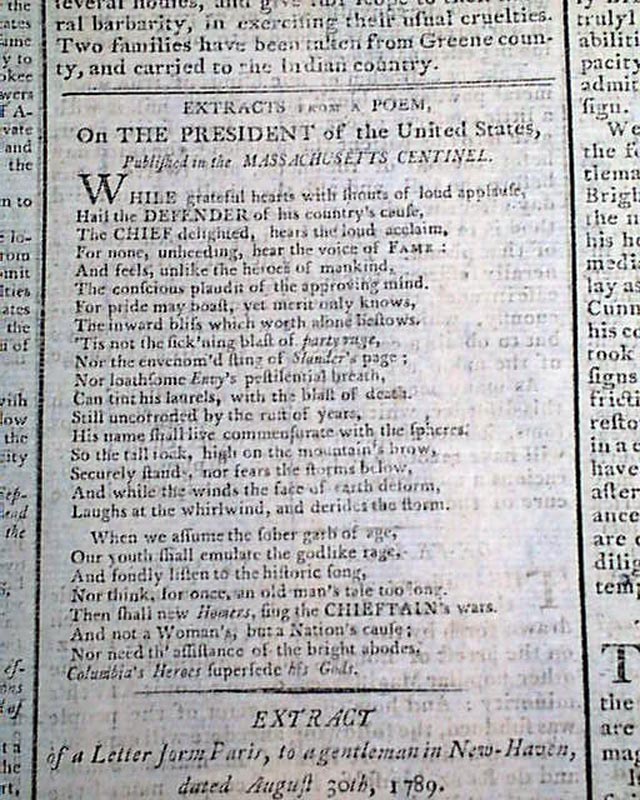 Letters signed by Jefferson and Adams...

The back page includes a letter signed by John Adams from when he was in Amsterdam in 1780, followed by a letter from Thomas Jefferson to the mayor & aldermen of Norfolk, Virginia, signed in type: Thomas Jefferson.
The back page also includes reports from the "Proceedings of Congress" from July 1-18, 1789, an historically significant period of the beginning of the federal government. Included is discussion of the passage of several Cabinet posts. The back page has an "Anecdote" concerning George Washington's visit to "...Lexington, viewing the field where the first blood was shed in the late war..." and Ben Franklin.
Pages 2 & 3 have some lengthy reports headed: "Indian Affairs" as well as a poem: "On The President of the United States", and a report that famed published Isaiah Thomas is printing a Bible.
Four pages, minor damp stains at the corners, a few stray ink marks, nice condition.

This title is considered by many as the most significant newspaper of the 18th century, particularly during this, the formative year of the new federal government & when the federal capital was in New York, as the Gazette was the mouthpiece of all matters political. Most pronouncements from Congress & the President were printed first in this newspaper.