Home > Back to Search Results > Taxation without representation...
Click image to enlarge 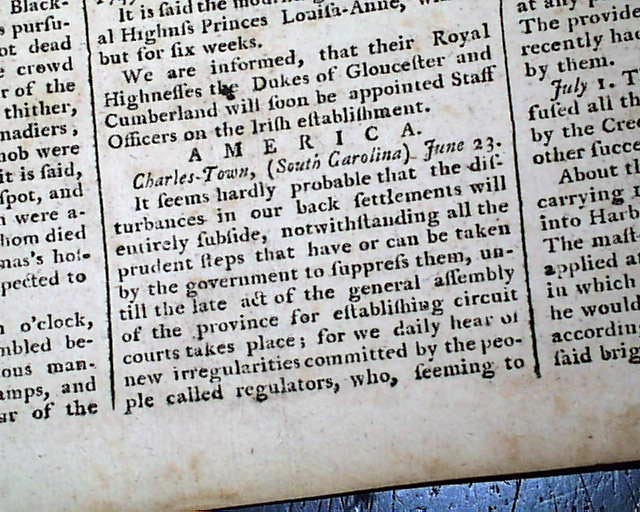 The front page has: "The Nuns General Character & Way of Living from an Account of the Manners & Customs of Italy" which carries over to pages 2 & 3 as well.
Further on under: "America" is a report from Charleston which begins: "It seems hardly probable that the disturbances in our back settlements will entirely subside...".
Also inside: "Copy of the Petition of the Province of New Jersey to his Majesty" which includes in part: "...One of these rights & liberties vested in the people of this colony is the privilege of being exempt from any taxations but such as are imposed on them by themselves, or by their representatives..." and further on: "...observe, that duties have been lately imposed on them by parliament for the sole & express purposes of raising a revenue: This is a taxation upon them from which they conceive they ought to be protected...that Freemen cannot be legally taxed but by themselves or by their Representatives..." with much more.
Also in this issue is another letter from the Assembly of Massachusetts with similar sentiments, taking nearly two pages & including in part: "...that the people in this province have attended with a deep concern to the several acts of the British parliament which imposes duties & taxes on the colonies, not for the purpose of regulating the trade, but with the sold intention of raising a revenue...". The back page has a report of the "Commencement"  at Harvard College, with a list of the graduates.
Eight pages, 8 1/4 by 10 1/2 inches, rubbing to portions of the front page folds causes some loss of text to an insignificant article, otherwise good condition.