Home > Back to Search Results > Great tribute to the Wright brothers... victors of the 1st Michelin Prize...
Click image to enlarge 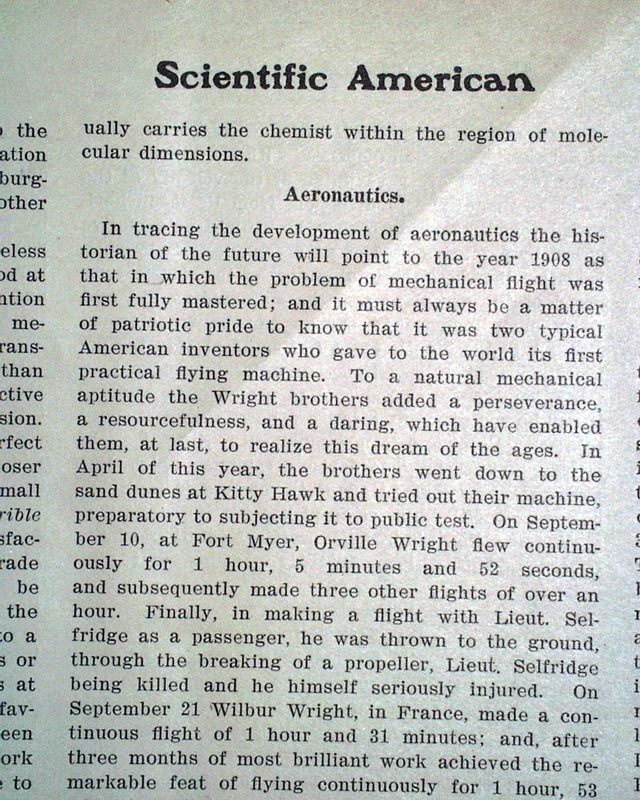 Great tribute to the Wright brothers... victors of the 1st Michelin Prize...


SCIENTIFIC AMERICAN, New York, Jan. 2, 1909  Page 6 has: "Aeronautics", which is a synopsis of several of the achievements of Orville and Wilbur Wright, and includes: "In tracing the development of aeronautics the historian of the future will point to the year 1908 as that in which the problem of mechanical flight was first fully mastered; and it must always be a matter of patriotic pride to know that it was two typical American inventors who gave to the world its first practical flying machine. To a natural mechanical aptitude the Wright brothers added perseverance, a resourcefulness, and a daring, which have enabled them, at last, to realize the dream of the ages. Mentions of Kitty Hawk, the Wright brothers winning the first-ever Michelin prize, and more are included.

Also included is a full front page illustration: "The Great Wave Scene At The London Hippodrome", "Forty-five tons of water are dropped from overhead tanks on a wave-forming board and projected into the arena", "Miniature Railroads for country Transportation", "Moving Pictures That Sing and Talk", "Moving Pictures in Colors", and the reporting of Patent #907,169 for the "automatic brake" (issued to J.M. Nordstrom).
Complete in 16 pages, measuring approx. 11 x 15.5 inches, minor edge tears, chipping at the corners, a small library stamp (punch) in the upper margin, and evidence of having been disbound from a volume. The spine has cracking which has been archivally reinforced. Needs to be handled with care. Slightly below average condition, but the content is good. Priced accordingly. See images for details.