Home > Back to Search Results > Death of Henry Ford, in a Detroit newspaper...
Click image to enlarge 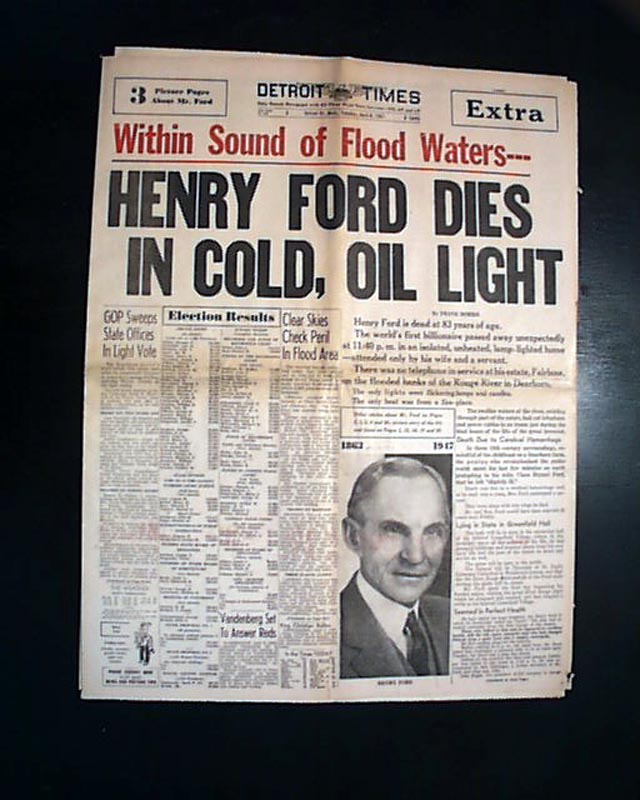 Death of Henry Ford, in a Detroit newspaper...

When it comes to collect death reports of famous personages, not only would Henry Ford rank among the top of non-politicians, but the report in a Detroit newspaper is about as good as it gets.
The headline is quite bold, announcing: "HENRY FORD DIES IN COLD, OIL LIGHT" with the text beginning: "Henry Ford is dead at 83 years of age. The world's first billionaire passed away unexpectedly at 11:40 p.m. in an isolated, unheated, lamp-lighted home--attended only by his wife and a servant..." with much more. Further inside are several pages of photos and other articles on his life.
Three interior leaves are missing, otherwise complete and in nice condition.
Pages 4 and 5 have many photos concerning his work and life.
Being an "Extra" edition, presumed complete in 14 pages, bit of fold toning, nice condition.