Home > Back to Search Results > Lizzie Borden is found not guilty of murdering her parents...
Click image to enlarge 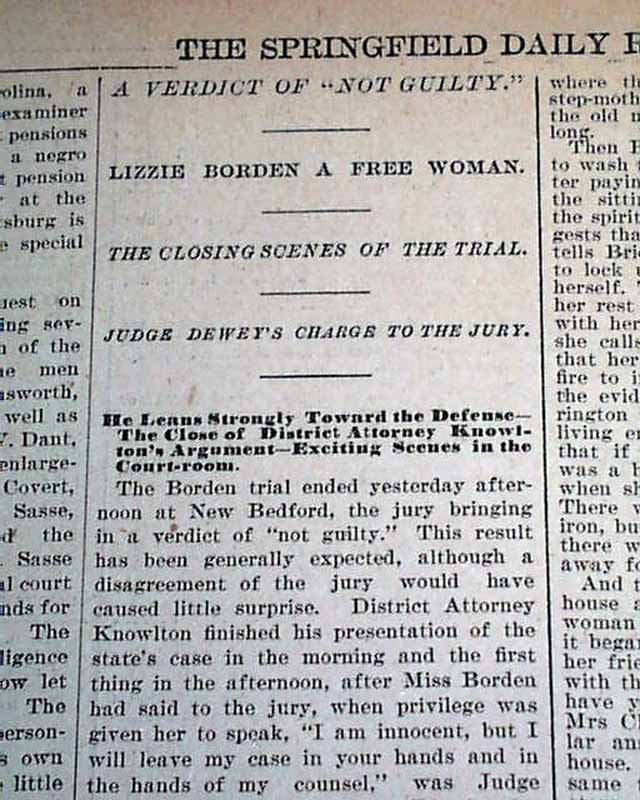 Lizzie Borden is found not guilty of murdering her parents...

Of the many issues of this newspaper which reported on the Lizzie Borden murder trial this would be one of the best, as it reports her being found not guilty.
Page 4 has a column headed: "VERDICT OF 'NOT GUILTY' " "Lizzie Borden A Free Woman" "The Closing Scenes of the Trial" "Judge Dewey's Charge to the Jury" with more.
This very detailed coverage takes fully half of the page with one of the subheads; "The Session In the Afternoon - Judge Dewey Charges the Jury--The Verdict 'Not Guilty' " with the details.
Also of interest is the page 4 editorial reflecting upon the decision, headed: "Who Killed Them?"
Great to have this report in a newspaper from the state where the trial happened, in New Bedford, Mass.
Complete in 8 pages, archival strengthening at the spine, light toning and minor wear at the margins, generally nice. The issue is somewhat fragile so it must be handled carefully.