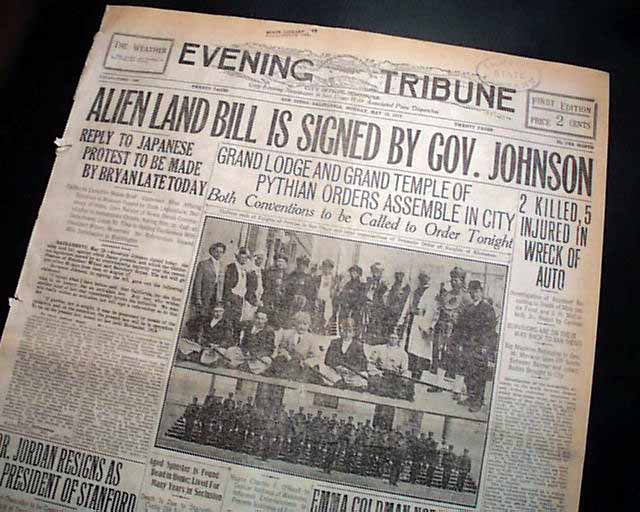 The front page has a nice banner headline: "ALIEN LAND BILL IS SIGNED BY GOV. JOHNSON" with subheads. (see) Nice for display. Surprisingly this issue is in good condition being from the "wood pulp" era. Very hard to find issues that are not totally fragile from this era in paper.
Complete with 20 pages, two small library stamps within the masthead, irregular along the spine, generally nice.

wikipedia notes: The California Alien Land Law of 1913 (also known as the Webb–Haney Act) prohibited "aliens ineligible for citizenship" from owning agricultural land or possessing long-term leases over it, but permitted leases lasting up to three years. It affected the Chinese, Indian, Japanese, and Korean immigrant farmers in California. Implicitly, the law was primarily directed at the Japanese. It passed 35–2 in the State Senate and 72–3 in the State Assembly and was co-written by attorney Francis J. Heney and California state attorney general Ulysses S. Webb at the behest of Governor Hiram Johnson.