Home > Back to Search Results > Eye-witness accounts of the Battles of Lexington & Concord...
Click image to enlarge 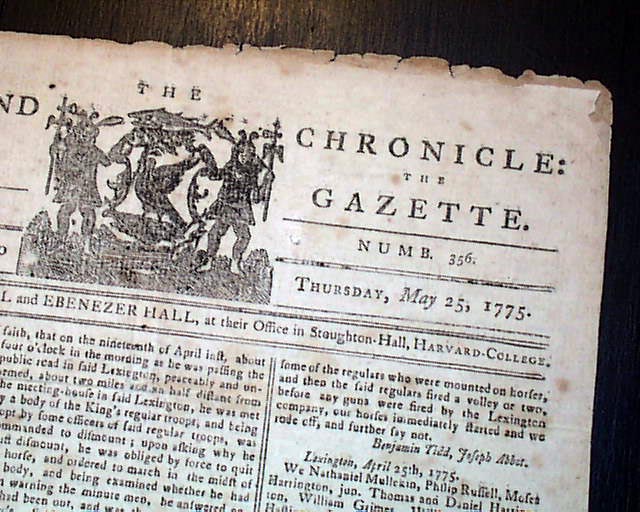 I'm not sure one could want a more notable front page--all consuming--than the content found on page one of this issue. It is entirely taken up with eleven very detailed eye-witness accounts of the historic Battle of Lexington & Concord (the latter two carrying over to page 2).
These accounts are headed: "Affidavits and Depositions Relative to the Commencement of the late Hostilities in the Province of Massachusetts Bay...".
The accounts are simply terrific, but are too voluminous for us to describe so we provide photos of their accounts in their entirety.

As if this was not sufficient for one newspaper, these affidavits are followed by a terrific document headed: "In Provincial Congress, Water-Town, April 26, 1775, to the Inhabitants of Great Britain" which begins: "Hostilities are at length commenced in this colony by the troops under command of General Gage, and it being of the greatest importance that an early true & authentic account of this inhuman proceeding should be known to you...think it proper to address you on the alarming occasion...on the night preceding the nineteenth of April instant, a body of the King's troops...were secretly landed at Cambridge with an apparent design too take or destroy rthe military & other stores...and deposited at  Concord...were seized & greatly abused by armed men...That the town of Lexington by these means was alarmed & a company of the inhabitants mustered on the occasion--that the regular troops on their way to Concord marched into the said town of Lexington...the Regulars rushed on with great violence & first began hostilities by firing on said Lexington company whereby they killed eight and wounded several others..." and much more on the Battle of Lexington & Concord. The report is signed in type by: Joseph Warren, who a month later will be killed at Bunker Hill.
There is more fine content in this issue--again to much to detail here--including references to Lexington & Concord & other events. See the photos. Page 3 even has mention of the Gunpowder Incident at Williamsburg, Virginia, as well as the arrivals of Patrick Henry & others in Phila. for the historic Second Continental Congress, & that "...100 Green Mountain Boys, under Col. Allen...were in the expedition against Ticonderoga & behaved with great bravery & resolution" (they--along with Benedict Arnold--would take Ticonderoga on May 10.
Simply a terrific issue, with a great front page, and a wealth of more notable content inside. A terrific to have this in a newspaper from Cambridge, Massachusetts.
Four pages, archival strengthening at the spine, some scattered damp staining, the lower corner of the front leaf was repaired with the missing 3 words of one affidavits hand written, loss to a lower corner of the back leaf does not affect any mentioned.content.